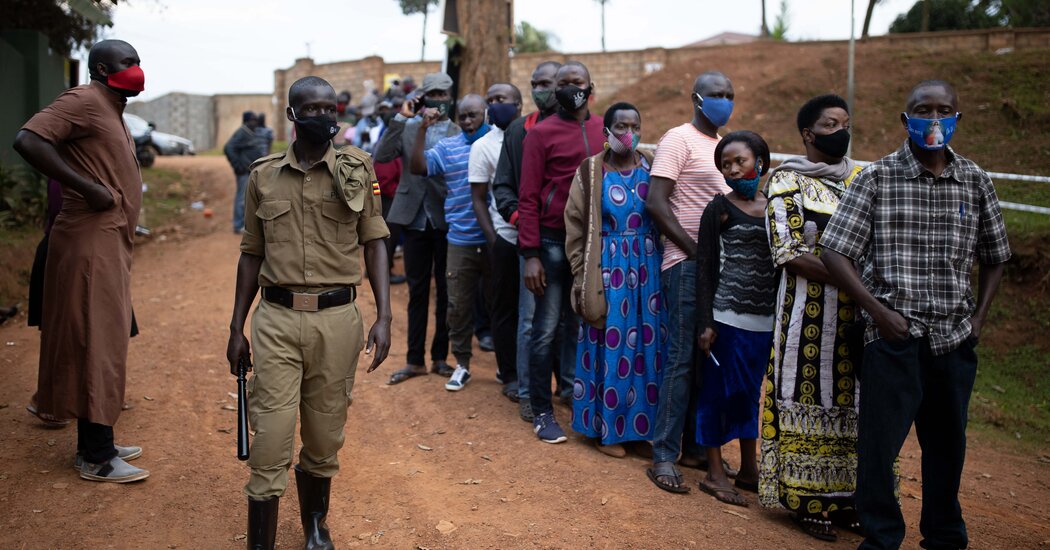 Ugandans began voting on Thursday in a hotly contested election that will decide whether President Yoweri Museveni wins a sixth term in office and continues his 35-year rule of the country or is unseated by one of 10 rivals, including a leading opposition candidate, Bobi Wine, a rapper-turned-lawmaker.

The vote, which has been unexpectedly competitive despite fierce government attempts to stifle the opposition, has drawn global attention as a test of how democracy might take hold in a country more accustomed to autocratic rule. The election is the fourth in the East African nation since multiparty politics was restored in 2005, two decades after Mr. Museveni first came to power and clamped down on competing parties.

The ballot also comes several months after the government introduced strict rules to curb the coronavirus pandemic — measures that have kept confirmed caseloads under 38,000, but which human rights groups said were used to crack down on critics and restrict political gatherings.

In a campaign marked by violence, killings and arbitrary arrests, observers will be watching for delays in ballot deliveries, voter intimidation and irregularities in vote tallying, along with possible unrest that could ensue in the coming days. The results of the election are expected late on Saturday.

Who are the main presidential candidates?

More than 18 million voters have registered for the election, where they will cast ballots for presidential, parliamentary and local representatives. There are 11 presidential candidates vying for the leadership of Uganda over the next five years, and a candidate must win more than 50 percent of the vote to avoid a runoff.

Most prominent among them is the incumbent, Mr. Museveni, a former rebel who came to power in January 1986 and has since ruled the country with an iron grip. At 76, Mr. Museveni is one of Africa’s longest-serving leaders.

His main rival is Mr. Wine, a 38-year-old musician who was elected to Parliament in 2017. Mr. Wine, whose real name is Robert Kyagulanyi, has long used his music to lament the state of the country under Mr. Museveni and aims to galvanize the youth vote to unseat him. During the campaign, security forces have beaten and tear-gassed Mr. Wine and he was charged in court for flouting coronavirus rules.

In early January, he filed a petition with the International Criminal Court accusing Mr. Museveni’s government of authorizing a wave of violence against political figures and human rights lawyers — including attempts to kill him.

Other candidates in the election have also been targeted, including Patrick Amuriat, who is representing the Forum for Democratic Change party. The authorities have beaten and detained Mr. Amuriat on several occasions, including the day he filed his candidacy papers in November.

Nancy Kalembe Linda, a former banker and news anchor, is the only female candidate running for president.

How has Museveni held on to power for so long?

Since Uganda’s independence from Britain in 1962, there has been no peaceful handover of power. When Mr. Museveni seized the reins in 1986, on the back of an armed uprising, he promised that his government would further the cause of competitive politics in a nation that had endured years of colonialism, and then dictatorship and lawlessness under the rule of both Milton Obote and Idi Amin.

But in the decades since, Mr. Museveni and the ruling National Resistance Movement have clung to power through politicized prosecution of opposition figures, while undermining independent media and civil society.

Mr. Museveni’s government has “insisted that its political opponents were ‘foreign agents’ funded by outsiders, that they were self-interested, that they were immoral and disposed against Ugandans’ interest,” said Derek R. Peterson, a professor of history and African studies at the University of Michigan.

Elections, when they have taken place, have been riddled with allegations of fraud and irregularities.

In 2018, Mr. Museveni signed a law that scrapped the presidential age limit of 75, a move that critics said allowed him to seek re-election this year. Opposition legislators and lawyers challenged the amendment, but the Supreme Court upheld it in 2019.

How has the government tried to control the flow of information?

Since the campaign kicked off in early November, journalists have faced harassment and beatings from security forces as they covered opposition candidates. The authorities introduced stringent accreditation rules for reporters, and deported at least one foreign crew, according to the nonprofit Committee to Protect Journalists.

Opposition candidates including Mr. Wine say they have been blocked by the authorities from appearing on radio stations to speak to the public.

With limitations on public gatherings because of pandemic restrictions, “social media provided aspirants with a potential way of reaching a large number of prospective voters,” said Jamie Hitchen, an independent researcher who has studied the role of technology in African elections.

But the government quickly found ways to undermine their reach on those platforms, too. In December, the government asked Google to block 14 YouTube channels, mostly linked to the opposition. Mr. Museveni also announced this week that he had ordered Facebook to be blocked in the country days after the company took down fake accounts linked to his re-election campaign.

As voters headed to the polls on Thursday, internet connectivity remained down across Uganda as the government ordered telecom companies to block access to social media platforms and online messaging applications.

What are the main issues at stake?

For a long time, Mr. Museveni and his party have cast themselves as a bulwark against a return to the violence and political strife that shaped Uganda in the 1970s and ’80s. But with more than 75 percent of the population under the age of 30, many young people no longer “live in the shadow of history,” Professor Peterson of the University of Michigan said.

“They have different aspirations, different fears, and different ambitions” than voters in earlier times, he added.

Key among the concerns of younger people is the question of jobs. Around 700,000 Ugandans reach working age every year, but only 75,000 new jobs are created annually, according to the World Bank. Many are also frustrated by the corruption that has been rife in Mr. Museveni’s government for decades, and they yearn for better infrastructure and improved public services, including better education opportunities and affordable health care.

Is the vote expected to be fair?

Previous elections in Uganda have been dogged by irregularities along with reports of ballot stuffing, voter intimidation, and voter fraud. Voters across the country have also previously been denied the ability to cast their ballots, with officials saying that their names were not found on voter registries. Ballots to opposition strongholds, including in the capital Kampala, have also been delivered very late in the past.

The validity of this election is already being questioned after observers, including from the United States, pulled out because of lack of accreditation. There have also been reports of the failure of electronic voter identification systems because of the internet shutdown.

Will Biden Be an Activist President on the...

What to Know as Troubled Afghan Peace Talks...