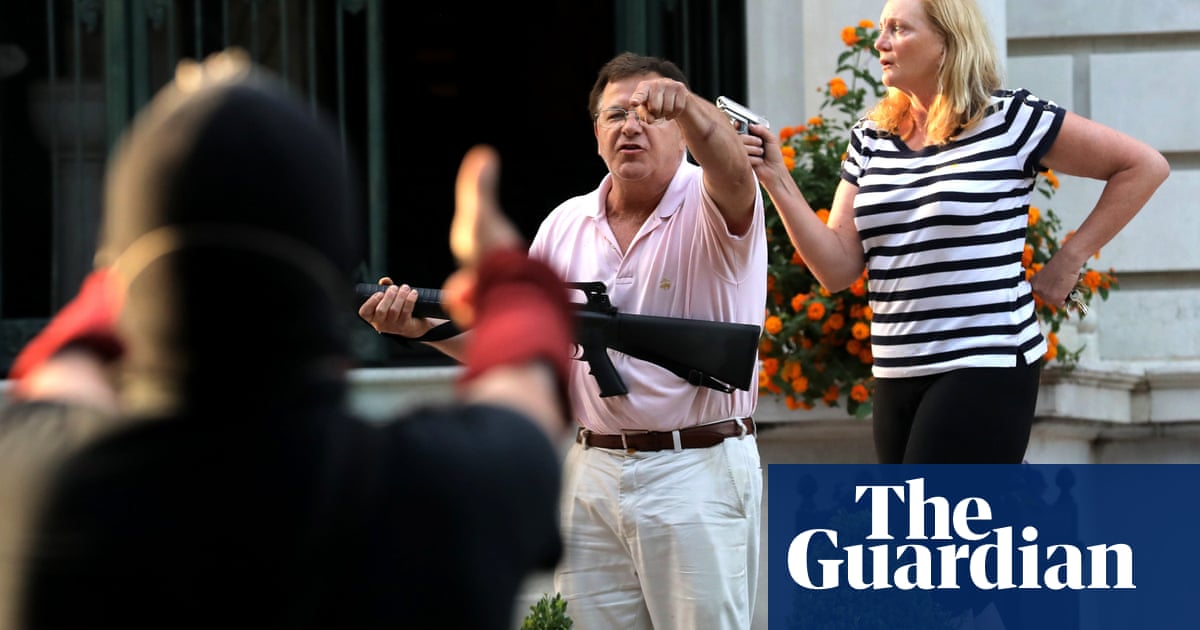 Donald Trump courted controversy on Monday – and perhaps sought to deflect attention from reports about Russia placing bounties on US soldiers in Afghanistan – by retweeting news footage of a white couple in St Louis, Missouri who pointed guns at protesters marching for police reform.

The president’s action came a day after he retweeted footage of protesters clashing in Florida in which a Trump supporter could be heard to say “White power! White power!”

That retweet was deleted from the president’s account after a few hours, a White House spokesman saying Trump had not heard the inflammatory words before sending the footage on to his supporters.

The protesters in St Louis were marching to the mayor’s home to demand her resignation.

In a Facebook live briefing on Friday, Lyda Krewson read the names and addresses of several residents who wrote letters suggesting she defund the police department. The video was removed from Facebook and Krewson apologized on Friday, stating she did not “intend to cause distress”.

On Sunday evening a group of at least 500 people headed towards the mayor’s home, chanting, “Resign Lyda, take the cops with you.”

Video on social media showed the armed white couple standing outside their home in the Central West End neighbourhood, shouting at protesters. The man carried an assault-style rifle, the woman a handgun. People in the march moved the crowd forward, urging participants to ignore them.

Buzzfeed News reported that a police report detailed the couple’s claim to have been threatened with harm and to have “observed multiple subjects who were armed”.

The couple were not immediately officially identified but multiple news reports identified the couple as personal injury lawyers Mark and Patricia McCloskey, owners of the grand “midwestern palazzo” home seen in video footage.

Missouri has liberal gun laws but Nico Bocur of Giffords’ Law Center to Prevent Gun Violence told BuzzFeed: “The right to bear arms does not give anyone the right to harass, intimidate and point guns at Americans they disagree with.”

Mayor Krewson, who is white, was elected as the first female mayor of St Louis in April 2017, pledging to reduce crime and improve impoverished neighborhoods. Her husband, Jeff Krewson, was killed in a carjacking in 1995. She and her two young children were in the car.

The names and addresses Krewson read out are considered public records but her actions prompted a heavy backlash. An online petition calling for her resignation had more than 43,000 signatures by Monday morning.

“As a leader, you don’t do stuff like that … it’s only right that we visit her at her home,” said state representative Rasheen Aldridge, speaking into a megaphone at the protest on Sunday.

Addressing Trump’s “white power” retweet earlier the same day, Tim Scott of South Carolina, the sole African American Republican in the Senate, said: “There’s no question that he should not have retweeted it.”

Andrew Stroehlein, European media director of Human Rights Watch, said on Twitter that retweet was “not surprising for a man who’s called neo-Nazis ‘very fine people’ and hired white nationalists to work in the White House, but still, immensely dangerous. With his poll numbers falling, he wants a race war.”

On Monday, White House press secretary told Fox News Trump’s “point in tweeting out that video was to stand with his supporters, who are oftentimes demonized”.

Trump’s Monday retweet of the video from St Louis also came after a gunman in Louisville, Kentucky, shot dead a photographer during protests over the death of Breonna Taylor, an African American woman killed by police in her own home. A man was charged with murder.

Trump also retweeted a series of messages seeking to identify protesters involved in attempts to remove statues of figures from American history.

Athletes Speak Out Against Returning: ‘People Are Still Dying’

Does Your Local Doctor Have a Coronavirus Test for You?

With Jobless Benefits Set to Lapse, Congress Is...

On Politics: An Eye Toward Opening for Business

Biden Will Fund-Raise With D.N.C. and His Appointee...