This Sledding Team Trained Hard for Gold in 2010. Some Members Regret It. 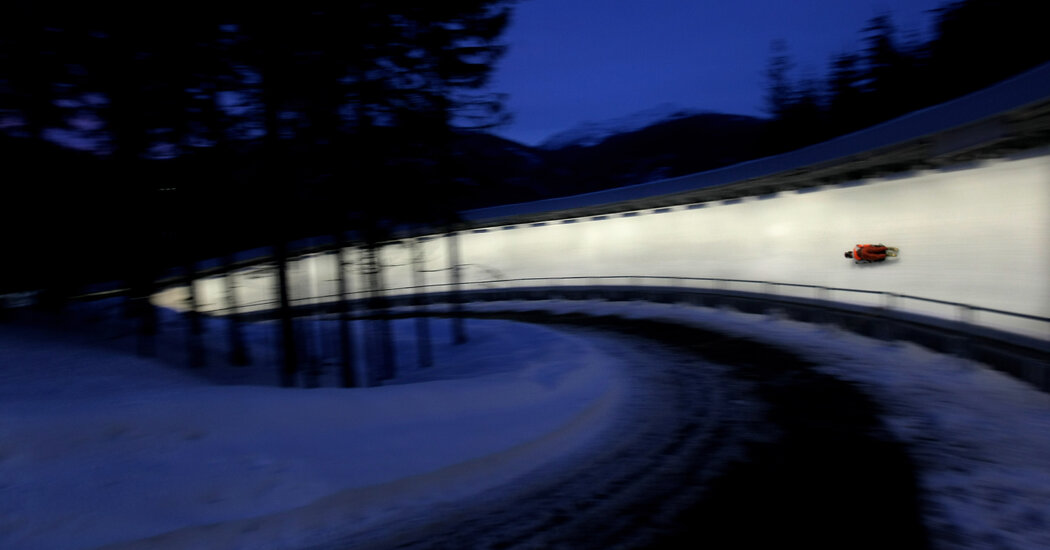 The chance to host the 2010 Winter Games was supposed to be a godsend for Canadian athletes who compete in skeleton, the headfirst sled run down a twisting track.

While most competitors get access to the track for just a handful of days leading up to the Olympics, the host country gets to practice far more, because its athletes are logistically closer and the sport’s rules allow it. The home team can memorize every detail of every turn on run after treacherous run.

Mellisa Hollingsworth, who was favored to win a medal that year in skeleton, said she and her teammates took as many as 11 runs a day down the track, the fastest in the world, at Whistler, British Columbia, about 75 miles north of Vancouver. When a training session ended, they were so worn out they struggled to put sentences together. Noise was intolerable. Their brains felt scrambled.

During the last decade, football and other contact sports have received most of the attention and research interest for traumatic brain injuries in sports.

By comparison, sliding sports, niche activities that require athletes to careen down twisting tracks of ice on sleds at 80 miles per hour, have been largely ignored. And yet, for years, elite competitors have talked about the mental fog, headaches, inability to eat or speak effectively, and sensitivity to light and sound that a day of training, or, for some, even a single routine run can produce.

They called it “sled head.” It was just something they had to accept, like cold weather, or sore muscles.

Now, in retirement, many of these athletes continue to struggle with many of those same symptoms, as well as forgetfulness, depression and mental illness.

Former top competitors like Hollingsworth, who finished fifth in skeleton at the Vancouver Games, Pascal Richard, also of Canada, and Katie Uhlaender, a four-time Olympian from the United States who wants to make one last Olympic team, wonder whether those symptoms are connected to their dramatic crashes and the brain-rattling runs.

They have watched teammates descend into depression and die by suicide. Since 2013, three former elite North American bobsledders have taken their lives. Another attempted it, and two others died of overdoses, a remarkable number given that just a few hundred athletes participate seriously in sliding sports at any level at once.

“It’s almost like the boxers all over again,” said Peter McCarthy, a neurophysiologist at the University of South Wales who has studied the dynamics of skeleton by attaching motion sensors to the athletes. “What you are doing is taking someone’s head and giving it a really good shake around, but in this case it lasts for a minute.”

McCarthy has been working closely with Mark Wood of Britain, who has coached multiple medalists in skeleton and is now on a crusade to make people understand that allowing an athlete to train or compete with “sled head” is akin to subjecting someone with concussion-like symptoms to 500 more slaps to the head.

People within the sport keep telling him he is going to ruin it.

“I say, ‘No I’m not. I’m going to make it safer,’” said Wood, who has coached for Canada, Britain and China. “The more data we get, the better information we can give.”

For many athletes though, the data is arriving too late.

In 1998, Pascal Richard was heading into the sixth of 19 curves, about one-third of the way down the track in La Plagne, France, the same one used for the 1992 Albertville Games. The gravitational acceleration forces spiked and slammed his face into the ice. The impact knocked him out. He remained unconscious the whole way down as he crossed the finish. Richard returned to training the next day.

Neck pain and problems with concentration lasted through the following summer, and the chronic fogginess increased as Richard pushed to make the 2002 Olympics in Salt Lake City, where he finished 15th. He retired after those Games, returning to his full-time job as a member of the Royal Canadian Mounted Police.

Richard soon started falling in and out of depression. He lost his temper easily. A single hit in a beer-league hockey game would put him out for the season. Work became too challenging, as he struggled to remember details of investigations and Canada’s penal code, forcing him to retire.

“My wife would tell you I’m not the person I used to be,” said Richard, who lives outside Calgary, Alberta. “I could have a great friend who called me on the phone and it could take me awhile to figure out who it is. I have lost part of my life.”

He is 48, has young children and would like to find something else to do. He said he doesn’t have the energy.

No one can say for sure whether skeleton is solely responsible for Richard’s downfall or anyone else’s, or how many runs it took Richard to get where he is today. He played other contact sports growing up. He suffers from post-traumatic stress disorder from coming upon so many grisly death scenes during his career with the Mounties, especially one in which he could not rescue a man stuck in the driver’s seat of a van that was on fire.

All of that could contribute to brain injury and depression.

But Tyson Plesuk has seen enough skeleton to be convinced that too many runs can pose serious danger to the brain.

Plesuk, a top sports physiotherapist in Canada, grew up playing hockey. He suffered three diagnosed concussions, and probably many that went undiagnosed. In 2010 when he became a physiotherapist with Canada’s skeleton team, he knew little about the sport.

As Plesuk began spending time with Hollingsworth and other team members, he noticed how much they needed to sleep when they were not training, how sometimes they could not eat or talk to each other during their lunch breaks. “It’s not normal behavior, but we needed someone from the outside for us to understand that,” Hollingsworth said.

At the beginning of the season, the athletes had taken a test to get a baseline for their cognitive functions. If they crashed and suffered a head injury they would have to take the test again, and they could not train or compete until their performance had returned to the baseline, even if scans of their brains looked clear.

Plesuk detected a problem though: The athletes could pass the test even when they had other symptoms of a concussion. Fearing they might miss a chance to train or lose coveted spots on the team, they wouldn’t dare mention feeling weak to their coaches.

As Plesuk and Duff Gibson, the team’s head coach and the 2006 Olympic skeleton champion, got to know the athletes better during the 2010-11 season, they noticed that many who struggled the most with the concussion symptoms had participated in the high-volume training leading up to the Vancouver Games.

Gibson can still remember when it was a point of pride for an athlete to finish a skeleton run with a bloody nose from banging their face on the ice. “The further back you go in history, the more cave man it becomes,” he said.

Now he understood how all the training likely left his athletes more vulnerable to repeated brain injuries and its symptoms, as run after run over tracks that look smooth but are really covered with bumps and divots can cause micro-tears in brain tissue, even if there is never a crash.

“The big thing is the repetitive shaking,” Plesuk said during a recent interview.

Gibson and Plesuk decided to limit runs to three per day for every athlete who competed for Canada. If an athlete didn’t seem “right,” they pulled her from competition, no matter the circumstances.

“If you see stars, that is not normal, and if you have a headache after a run, that is not a normal condition,” Gibson said.

Heading into the 2014 Sochi Olympics, Hollingsworth got pulled from a race, which resulted in a lower starting slot and may have contributed to her 11th-place finish.

Hollingsworth knew Gibson and Plesuk had made the right call. Leading up to those Games in Russia, she struggled to wake from naps after a hard morning of training. Hours passed before she could walk 10 normal steps. One afternoon she came down with vertigo while visiting a sporting goods store and ended up curled in a ball on the floor.

She retired after Sochi. She can struggle to remember details of even recent experiences. She recalls little of what happened during the few years leading up to Vancouver; even races she won, moments that should stand out, are a blur, or have disappeared altogether. She has no recollection of her first skeleton run when she was a teenager.

She can’t be in loud or busy places. After a concert, she can’t sleep for a night or two. A small restaurant with a lot of chatter can make her ears ring.

She will not recruit athletes to compete in the sport that was once her life.

Last year, WinSport, Canada’s winter sports organization, began dismantling the Calgary bobsled and skeleton track where Hollingsworth started. After 30 years, it was deemed at the end of its life cycle. As the track came down, Hollingsworth said she felt nostalgia, but also something else — comfort that no one would get hurt there anymore.

Like Old Hollywood Movies, Video Games Get a Polish for New Audiences

The Strange Lives of Objects in the Coronavirus Era

Shut Out of Disney World, Where Do These...

Baseball Is Showing Some Early Optimism. How Long...

They Celebrated Basketball and a Birthday. Then Came...

For a Small Stable, Big Prizes Could Lie...

We Went Inside a Sports ‘Bubble.’ Here’s What...