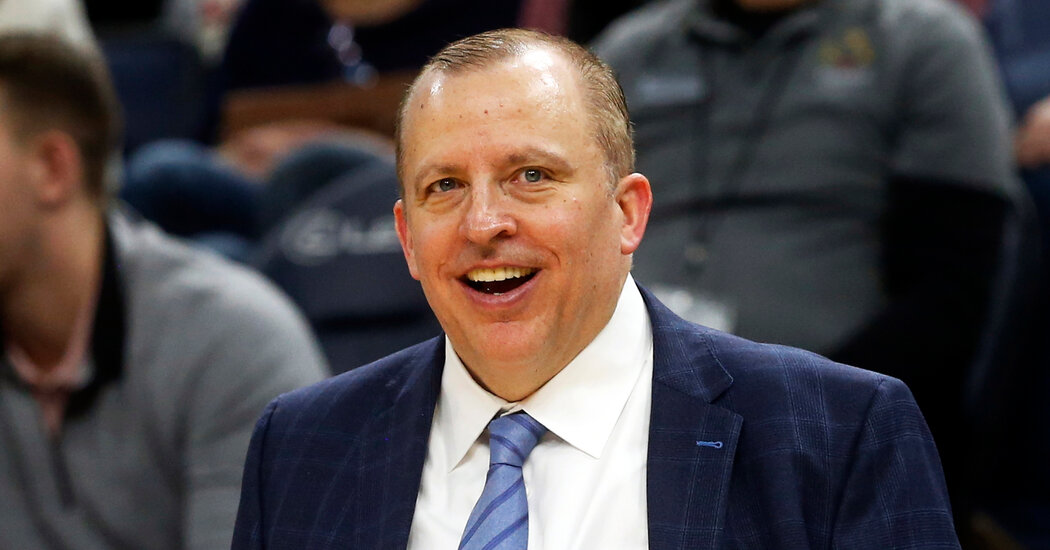 There was an exhortation for patience and a newfound optimism for the future. There were assurances about a disciplined style of play and the willingness to build a winning culture. And there was a shout out to the 1990s Knicks.

It was not déjà vu. It was yet another introduction of a new Knicks coach, this time Tom Thibodeau, a former Coach of the Year Award winner, whose hiring was announced at a Zoom news conference on Thursday.

Thibodeau will become the team’s eighth coach since 2011. He is the latest to try to revive the Knicks, who will miss the playoffs for the seventh straight year, the longest streak for the franchise since the 1960s.

The last time the Knicks were a perennial powerhouse, Thibodeau had an inside view as an assistant coach from 1996 to 2003, including a finals run, a point he made sure to emphasize to reporters. He thanked Jeff Van Gundy, the former Knicks coach, for hiring him then and singled out players like Patrick Ewing, Larry Johnson and Allan Houston, who are considered near-deities among the Knicks fan base.

“We saw how hard they played. They gave us everything they had each and every night,” Thibodeau said.

He was joined in the news conference by Leon Rose, the recently hired Knicks president, and Scott Perry, the general manager, whom the team extended for at least another year. Rose has had a two-decades long relationship with Thibodeau, in part because Rose was a longtime agent at Creative Artists Agency, which represents Thibodeau.

“The relationship gives me a comfort level, knowing Tom for that long,” Rose said. He added, “Tom was really the perfect candidate from the standpoint of that he’s going to demand accountability, he’s going to have development and he’s going to create a winning culture.”

Thibodeau said he was drawn to the Knicks because of its roster — which he called “young and talented” — and his connections to the Knicks front office, as well as the team’s abundance of draft picks and cap space. He also said that, as far as on-court play, he would focus on five pillars: defense, rebounding, low turnovers, having the ball touch the paint and making the extra pass.

“You go step by step. I think you don’t skip over anything,” Thibodeau said. “The first thing is to lay the foundation, develop your plan and then work the plan.”

While Thibodeau mentioned RJ Barrett and Mitchell Robinson as two current Knicks players he was fond of, it’s not clear, given the team’s draft picks and cap space, what the roster will look like next season, which Rose acknowledged. Rose said that the Knicks “had not set a timeline” for when the team would be a playoff contender again.

“We felt that Tom was that coach that can take us from development to becoming a perennial winner,” Rose said.

Thibodeau spent more than 20 years as an assistant coach in the N.B.A., developing a reputation for designing strong defenses, having an obsessive work ethic and playing his stars for heavy minutes. He was the architect of the defense for the 2008 Boston Celtics, who won a championship.

His first head coaching job came in the 2010-11 season with the Chicago Bulls, where he went to the Eastern Conference finals in his first year. Thibodeau went 255-139 with the Bulls but was fired in 2015 after clashes with the front office. He landed with a rebuilding team — the Minnesota Timberwolves — in 2016 as coach and president of basketball operations. Thibodeau was fired abruptly last season after only making the playoffs once and going 97-107.

He told reporters on Thursday that while he had caught a few Knicks games this season, he also traveled quite a bit, including a trip to unwind in Miami.

“I also went on vacation a couple of times,” Thibodeau said. “I know people don’t think I do that.”

Champions League Final to Be Moved From Turkey

David Najem Has Been Reading a Lot, but...

The Athletic Lays Off 8 Percent of Staff

Can Golden Boy Bring Boxing Back?

This Sledding Team Trained Hard for Gold in...