Top Posts
What Was the Problem With ‘Wyatt Cenac’s Problem...
‘Fast And The Furious’ Star Jordana Brewster And...
Umbrella Academy season 2 trailer: When is The...
Stocks Rise Despite Surge in New Virus Cases:...
Walgreens strikes deal to open hundreds of doctor...
Cheap Energy Was A Surprise Benefit Of QE,...
The Boohoo Disaster, Explained – The New York...
What Counts as a Streaming Hit? A Start-Up...
$650,000 Homes for Sale in Minnesota, Tennessee and...
New Red Algae Are Threatening Hawaii’s Coral Reefs,...
Home FinanceEconomy Starting Bonus for a Laundry Worker: How a Beach Town Wrestles With Jobless Benefits
EconomyFinance

Starting Bonus for a Laundry Worker: How a Beach Town Wrestles With Jobless Benefits 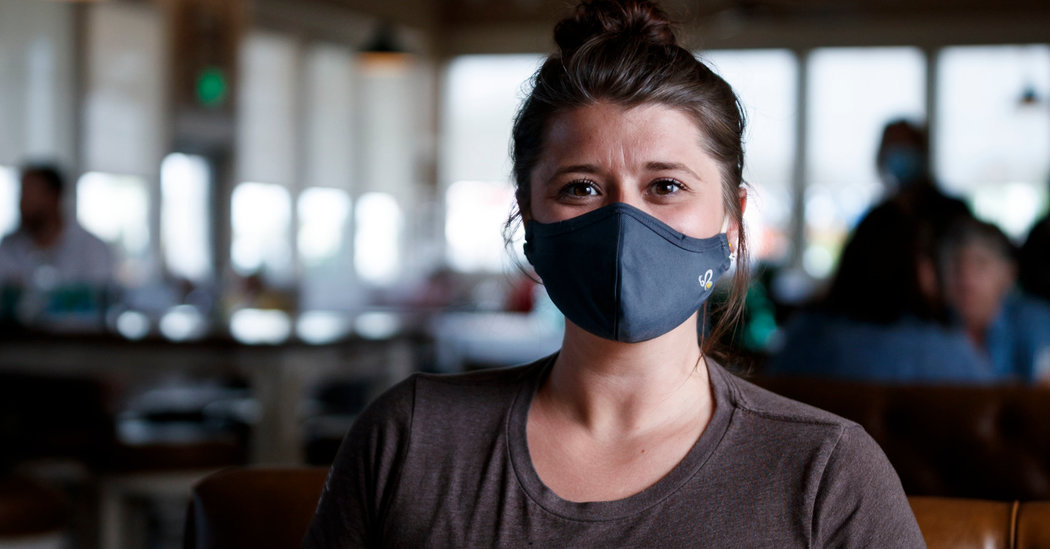 REHOBOTH BEACH, Del. — Kelsey McGarry came back to her job at Thompson Island Brewing Company in Rehoboth Beach, Del., in April even though doing so meant that she was earning less than she would have simply by accepting unemployment insurance, which included an extra $600 per week.

“I’m a go, go, go personality,” McGarry, 26, said through her face mask on June 15, sitting on the patio of the now partly re-opened restaurant, a breezy space with a display of brightly colored beer cans on sale. Plus, it was flattering that she was given the chance to come back early. “It was nice to be asked back. Being here, being with everyone, it was better than being at home.”

Just down the road at Jake’s Seafood House, Courtney Ewell made a different calculation. She was laid off from her job serving and managing on March 14. When her boss got a federal small business loan she was offered the chance to do odd-jobs around the still-closed restaurant. She passed up the chance and continued to receive unemployment benefits, though she helped repaint the place for fun — just to get out of the house.

“Who is turning down unemployment insurance plus the $600?” she said.

Ms. Ewell officially returned to her job this month, as Jake’s prepared to reopen and she felt confident that between it and another restaurant where she works, she could make enough in tips to outweigh the extra money.

As they raced to shore up the economy in March, lawmakers approved the $600 supplement to help workers who were suddenly thrown out of a job as the economy shut down. That extra money, which expires on July 31, has become a source of debate as lawmakers, the White House and economists spar over the extent to which the enhanced benefit is deterring people from returning to work and how to balance that against the critical financial cushion it offers to displaced workers.

Democrats are pushing to extend the enhanced benefit in order to continue helping workers amid double-digit unemployment. Many Republicans want to let the extra $600 expire or be scaled back, saying more generous payments will worsen unemployment.

Rehoboth provides insight into that worry: Employers in the town are finding that the extra benefit can discourage workers from seeking new jobs, but not as often as one might expect. And when it does, there are generally other factors at play.

The supplement is essentially a weekly bonus of $600, on top of traditional unemployment benefits, to workers who have lost jobs and filed for unemployment. That bump has allowed a large share of laid-off workers to draw more money from unemployment than they were making in their jobs. If it is expanded through the end of the year, the nonpartisan Congressional Budget Office estimates that five of six recipients will get more from the government than they earn would at work.

The extra money has helped millions of Americans weather the sudden shock of losing jobs, hours and income. It has buoyed both savings and consumer spending at a time when many largely homebound Americans have pulled back on purchases. Many economists, including those at the budget office, say the supplemental benefits are a key reason the economy has begun to bounce back — as seen in a jump in retail sales in May.

There is little evidence in national economic data so far to suggest wide swaths of workers are choosing to remain unemployed. The law that created the supplemental benefit prohibits Americans from continuing to receive the money if they are recalled to their regular jobs by employers that laid them off, but refuse to return. States have suspended normal work search requirements needed to qualify for unemployment insurance amid the pandemic.

And many people lack the opportunity to return to work: The nation still is down nearly 20 million jobs from what it had in February, according to the Labor Department, and the number of job seekers far exceeds the number of openings.

“Eventually, as the economy starts to come back to something like normal, you do want to think about relative prices” between benefits and wages, said Austan Goolsbee, now at the University of Chicago’s Booth School of Business and a former top economist for President Barack Obama. “That’s not the world we’re in.”

As the economy climbs out of its recessionary hole, that calculation could start to change. The Congressional Budget Office estimates that an extended enhancement would probably lead to higher unemployment in the second half of 2020, and would almost definitely lift the jobless rate into 2021 as low earners choose to continue collecting extra benefits rather than securing work.

Some economists — including several who initially championed the expanded benefit — are proposing to eliminate or phase it out. Casey Mulligan, a former chief economist for President Trump’s Council of Economic Advisers, predicted a “big increase” in employment whenever the expanded benefits run out.

“The direction is clear,” Mr. Mulligan said in an email interview, “but more than the usual humility is required regarding magnitudes.”

It is difficult to know how workers would react to an extension, in part because employees make decisions with the long run in mind. They know more generous benefits will not last forever, so they may try to secure jobs now. Many enjoy their jobs and want to return. For others, the unemployment insurance improves the appeal of staying home, but is just one of several factors alongside limited child-care options as schools and camps remain closed and as health concerns persist.

The Rehoboth Beach-Dewey Beach area could reveal how those interactions will play out, because the resort town continues to have high demand for workers in parts of its service industry.

The area experiences a huge seasonal surge in consumer demand this time of year as beachgoers descend, stoking a need for bartenders, cooks, cleaners and other workers. The demand for workers has been exacerbated by the fact that the foreign students, who usually come to America for seasonal jobs, remain stuck at home amid the pandemic, leaving a hole in the usual summer labor force.

In much of the country, workers are plentiful given the nation’s 13.3 percent unemployment rate. So if one person wants to keep collecting unemployment rather than returning to work, that simply leaves a job open for another available applicant.

Because Rehoboth needs certain — often relatively low-paid — workers to make its tourist economy run, incentives that keep would-be employees on the sidelines could be damaging.

Rob Marshall, owner of the Atlantic Oceanside Dewey Beach Resort a few minutes down the road from Rehoboth, says the headache is real. He was having so much trouble hiring cleaners and the other workers necessary to service his 60-room hotel that he initially expected to spend most of June running at half capacity on the weekends.

The extra $600 makes it hard to find new hires who were working somewhere else at the time of the layoffs, he said. They are under no obligation to apply, making it difficult to complete the usual seasonal hiring ramp-up.

“It does make the government a competitor,” he said. “A lot of people want to get out and want to come to the beach — and we want to have them. The problem is that we don’t have the staff.”

He has managed to blunt the impact. By taking some rooms offline during weekdays for cleaning, recruiting high school students, and giving one laundry worker a starting bonus to compete with the unemployment insurance expansion, he is running at 70 percent to 90 percent capacity on the weekend.

That isn’t enough to turn a good profit, and he is scrambling to hire for more reasons than just expanded unemployment insurance. Some of his employees have been nervous to come back out of concerns over virus exposure, and in the case of his new laundry worker, child care was also an issue.

“She wanted to work, and the day care opened up this week,” he said in mid-June. Delaware moved to phase two of its reopening plan on June 15, allowing restaurants to run at fuller capacity and some other businesses to restart.

Many Democrats who favor extending the benefit say they would tie it to economic conditions, phasing it down as unemployment falls. Some Republicans, including Representative Kevin Brady of Texas, the top Republican on the Ways and Means Committee, favor replacing the supplement with a “bonus” payment for unemployed people who go back to work — an idea that has gained traction with White House officials, who have also expressed reluctance over extending the benefits.

Business leaders around the nation have echoed the White House’s concern. The Fed’s latest Beige Book, a survey of anecdotal reports from companies across America, highlighted worries that fear of the virus, issues with child care and unemployment insurance would keep people from returning to work, including in the Dallas and San Francisco districts.

Those barriers may prove less economically crippling than they seem. Frontline Source Group Inc., a staffing company in Dallas that participates in the Beige Book, did see a wave of people turn down jobs because of unemployment insurance. The company managed to fill all of the open spots after interviewing other applicants, according to Bill Kasko, the chief executive.

Many economists warn that the bigger risk is removing benefits too early, leaving people who cannot find new work with more limited financial cushion, based on assumptions about work disincentives that check out only sporadically.

Ms. Ewell’s boyfriend is an example of how the benefits can play out differently than one might guess based on cold equations. He works at a cook at another local restaurant, and went back in May even though it meant that he was leaving a lot of money on the table.

Take these 5 steps to protect yourself against...

The Week in Business: The Post-Lockdown Office

Child-care centers may be closed but some parents...

Dealing with returns could be bigger burden for...

Mold Can Make Your Family Sick. Here’s How...