Top Posts
U.S. Retail Data Expected to Show an Increase:...
‘It’s like a war’: beatings and indiscriminate arrests...
Somalia’s Army Told Her to Sew a Skirt....
Kingston: A City Remade by the Coronavirus
45 Tweets About Grocery Shopping In The Age...
A Third of TikTok’s U.S. Users May Be...
Welcome to the Covid-19 Mental Health Struggle
The Japanese Surrender During World War II: A...
How Kate Pierson, of the B-52’s, and Monica...
In Prison, Learning Magic by Mail
Home Politics Prosecutors Struggle to Resume Guantánamo Trials
PoliticsWar & Conflict 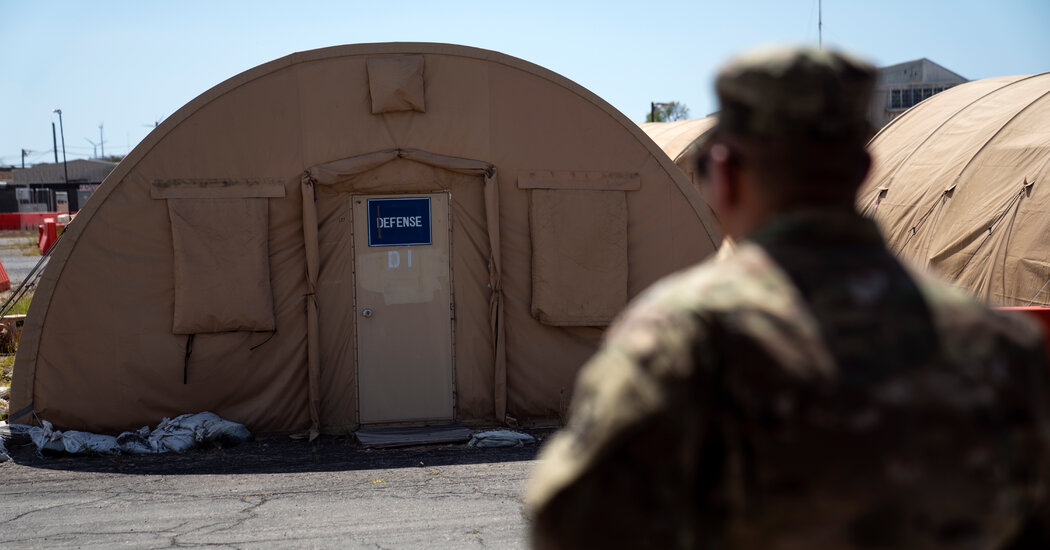 Complications had already cast doubt on whether the Sept. 11 trial, predicted to last more than a year, would begin by the 20th anniversary of the attacks, in 2021. Most classified defense work has been on hold since virus-related restrictions paralyzed travel for many of the lawyers, who are spread across the country.

The lawyer, David I. Bruck, 70, one of the nation’s leading capital defense lawyers, joined the case in April to replace a 75-year-old defense lawyer who left the team representing one of the defendants, Ramzi bin al-Shibh, for health reasons. But Mr. Bruck, who is based in Virginia, has not yet received a security clearance and has not been able to travel to Guantánamo to meet Mr. bin al-Shibh, who is accused of being a deputy to Mr. Mohammed in the Sept. 11 hijacking plot.

None of the defense lawyers have met personally with any of the 40 wartime detainees at Guantánamo since the start of the outbreak because they are considered particularly vulnerable if they are infected. All the detainees are in their second decade of custody and many have conditions that put them at high risk, including obesity, diabetes and high blood pressure.

A New York City criminal defense lawyer who this year shared a six-man tent at Camp Justice to observe a session of the case for the American Bar Association likened the prosecution plan to a modification of the way professional sports leagues are resuming games — but on a naval base in Cuba without the testing and medical care, and with greater risk and lawyers in their 60s and 70s.

“In basketball, a guy gets sick they take him out and test everybody twice in 48 hours,” said Joshua L. Dratel, who defended a case at the Guantánamo war court in 2006 and 2007, when lawyers were put up in officers’ quarters. “What if 20 people got sick at Camp Justice? Could the hospital even handle it?”

The proposal for a quarantine starting in September is part of a flurry of efforts by the prosecutors to resume hearings in all four active war crimes cases after a series of setbacks and obstacles — including an adverse court ruling against the prosecution in a rare case of a prisoner who has cooperated with the prosecution.

The last hearing at the court compound was held in late February in the case of Majid Khan, a confessed Qaeda courier who turned government witness in 2012 but who has yet to testify in a single case. The judge in that case, Col. Douglas K. Watkins, recently rebuked prosecutors for withholding evidence and awarded Mr. Khan a year off his ultimate sentence.

Republican Stimulus Package May Come With a Benefit for Big Banks

Americans Abroad Ask Whether to Stay, and Risk...

The FBI has a history of targeting black...

Attorney general will defend aggressive US response to...