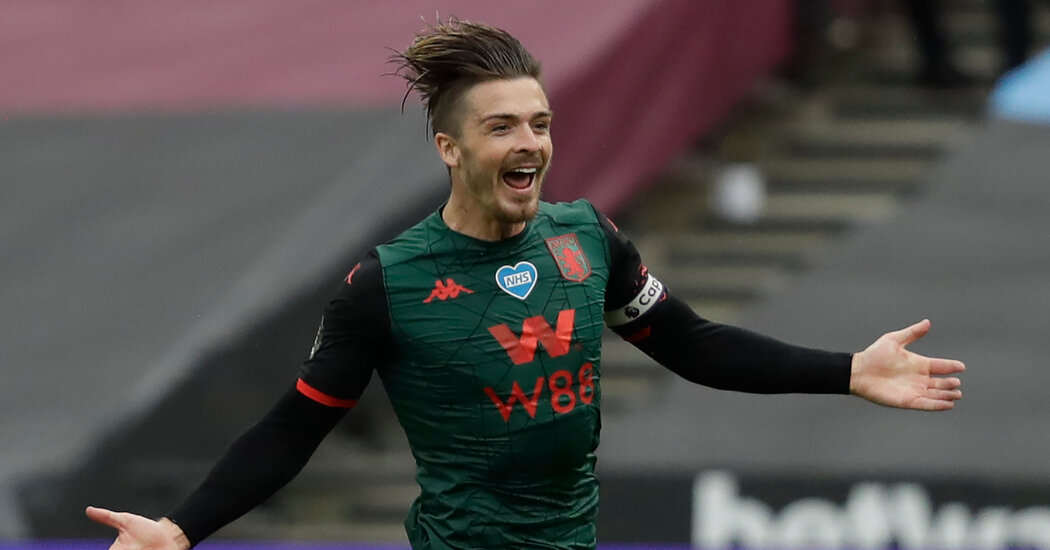 LEICESTER, England — Those final few minutes, the ones upon which an entire season rests, do something strange to time. The clock seems to slow, each second clawing and scratching for its moment before it yields to the next. But each is so pregnant with meaning, or with the possibility of meaning, that even in these moments that last an age, it can be hard to keep up.

Leicester City is losing at home to Manchester United, and Chelsea is winning at home to Wolves. United and Chelsea will make the Champions League. Unless Leicester can make something of this free kick: the goalkeeper, Kasper Schmeichel, has gone up.

Aston Villa has scored at West Ham. That should be enough to ensure its survival: There are only four minutes left. Bournemouth is ahead at Everton, and Watford is threatening a comeback at Arsenal, but as things stand, both would be relegated. In the time it takes a screen to refresh, though, West Ham scores to draw level. It is back on the knife edge. Another goal and Villa might yet fall.

This was the final day as the Premier League would have wanted it, the final day that the Premier League, not so long ago — not so long as it feels, in this year when every day has somehow felt like a lifetime and yet every week has passed in the blink of an eye — worried it might never have, as its clubs bickered and squabbled and the coronavirus pandemic threatened to claim the season itself.

The title, long since claimed by Liverpool, might not have been in play on Sunday, but almost everything else was. Six of the 10 games on the pandemic-delayed schedule’s final day had something tangible at stake, something beyond league position or personal pride or a lingering sense of optimism ahead of the new season, hovering close on the horizon: a place in the Champions League, a slot in the Europa League, survival.

That jeopardy remained almost to the last moment. United scored deep into injury time to confirm its victory at Leicester, and the return to the Champions League that the club hopes might act as a springboard to help close the gap on Liverpool and Manchester City. Villa’s struggle lasted until the final whistle against West Ham; only then were Bournemouth’s hopes extinguished, and its relegation confirmed. Watford followed them down a few minutes later.

The season that had started 352 days ago, with Liverpool’s dismissal of Norwich on a balmy August night in a very different world, had retained its intrigue until its final whistle. That, the Premier League would say, is why it had to play on, why it could not declare the season over in March, why it did not want to decide its outcome on paper. The most compelling league in the world, after all, deserved a conclusion.

There can be no question that the Premier League — like the Bundesliga, the competition that showed everyone else the way, and the other leagues across Europe that followed in its footsteps — deserves credit for finding a way through, for playing to completion in the age of the pandemic.

In that long, frightening spring, as executives and observers alike debated the morality of doing so in the face of daily death tolls touching the thousands, there were times when it felt a distant prospect.

It has passed off, though, relatively smoothly. The swaths of positive tests that many feared have not materialized. There was no need for neutral venues. The players have handled the compressed workload impressively well. The standard has not dropped, and nor has the drama.

That it has all been played out in stadiums stripped bare of fans has given games an eerie, alien air, and demonstrated how much of soccer’s spectacle is dependent on packed houses, but it has not deprived the games of meaning. This has not, as once appeared a threat, been a season of asterisks.

There has been little sense that the players are going through the motions: the suffering of Leicester players in the stands at the King Power Stadium on Sunday was no less real than the joy of Liverpool’s players in lifting the Premier League trophy on Wednesday night.

Players do play for the fans, of course, for the faintly mystic institution of the “club,” the one that lives in collective memory and in myth accumulated over time. But they also, at heart, play for themselves: for their ambitions, for their pride, for their win bonuses, for their new contracts, for their sense of worth. They have imbued this strange and quiet mini-season, this delayed denouement, with their own purpose.

But for all that the 2019-20 Premier League season will always stand out — the season of the pandemic, of empty stadiums and games in July — it is worth pausing to ask quite what has made it memorable, aside from the circumstances of its climax.

Perhaps it was the introduction of the video assistant referee system, tortured and then decisive: Aston Villa might have been relegated, and Bournemouth survived, had it not been for a technological error on June 17, the day the league returned, when V.A.R. failed to spot a Sheffield United goal at Villa Park.

There was certainly Liverpool’s relentless march toward its first championship in three decades; possibly the end of one era at Tottenham Hotspur and the start of a new one at Arsenal; maybe the final sight of David Silva, one of the finest imports ever to grace the league, on English soil.

The top four teams are the four richest in England. Even Tottenham, which fired a coach and spent much of the season in crisis, managed to finish sixth. Might, as always with the Premier League, has served to make right.

All that drama on the final day, those long minutes and those nails chewed to the quick and those glances at the table as it stands, wondering what might come next, and here we are again, with everyone — a couple of notable exceptions, in the form of Sheffield United and Burnley, aside — in their rightful place, as ordained by their financial firepower.

It took 352 days. The Premier League rode out a pandemic, waited until the final whistle. And then, after all of that, everything was just as it always is. The season that nobody could have foreseen ended just as you would have predicted.

The MLP Structure Is Under Siege

Las Vegas Doubles Down on Sports, Live and...

The French Cut the Tennis Tournament Line. And...

Tracy McGrady and Jermaine O’Neal Have Been Talking....

Premier League Players and Clubs Fight Over Who...

It’s Serena vs. Venus Williams in a Tuneup...