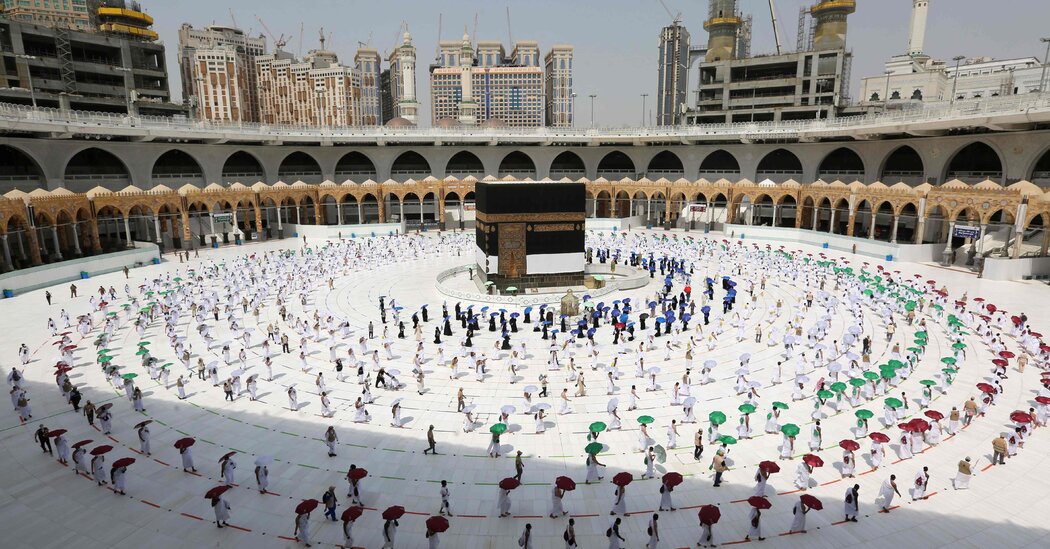 BEIRUT, Lebanon — In any other year, Muslims undertaking the hajj, the annual pilgrimage to the holy city of Mecca that all Muslims are supposed to perform at least once, would drink from a holy well. They would kiss the sacred black stone embedded in the Kaaba, the holiest shrine in Islam, as they thronged the Grand Mosque. Before they left Mecca, they would collect pebbles to ritually stone the devil, casting them at a series of symbolic pillars.

During the coronavirus edition of the hajj that began Wednesday, however, the black stone is off limits to kissing and touching. The authorities in Saudi Arabia are issuing personal prayer rugs and bottled water from the holy Zamzam well instead of letting pilgrims drink from cups at the mosque. Even the pebbles pilgrims hurl at the devil have been sterilized, all in an effort to prevent a coronavirus outbreak from marring a pilgrimage which tradition holds stretches back thousands of years.

But the chief public health measure the Saudi government has taken to protect the hajj is to limit attendance, shrinking one of the world’s most famous crowds to a select, socially distanced few.

Last year, some 2.5 million Muslims from around the world performed the hajj. This year, Saudi Arabia said it would allow just 1,000, all from within the kingdom, though some news reports suggested the final number could be higher.

As the custodian of Mecca and Islam’s second-holiest city, nearby Medina, Saudi Arabia both enjoys the prestige of hosting millions of Muslim faithful each year and bears the responsibility of keeping them safe. Crowds have led to tragedy in the past — hundreds, sometimes thousands of pilgrims have died in stampedes over the past century — but rarely have they posed such a danger as during the coronavirus pandemic, which forced the kingdom to restrict the hajj to its smallest size in modern history.

Since Saudi Arabia was founded in 1932 the hajj has never been canceled. But plagues, war and political disputes have led to restrictions in the past.

Attendees this year are required to self-isolate before and after the pilgrimage and to maintain social distancing while performing it. Videos and photos from Mecca this week showed pilgrims placed in neatly spaced concentric circles around the black-clad Kaaba, which authorities said had been sterilized and perfumed by 3,500 workers.

The pilgrims wore white garments and masks, carried personal prayer rugs and shaded themselves with colorful branded umbrellas, all provided by the hajj authorities in advance.

Foreign residents of Saudi Arabia are expected to make up 70 percent of this year’s pilgrims, the kingdom announced this week, with the rest drawn from Saudi health care workers and security personnel who had recovered from Covid-19 — a gesture of appreciation for their service, officials said. The government did not say how the pilgrims were chosen, though it previously said it would give priority to healthy residents between 20 and 50 years old who had tested negative for the virus and had never performed the hajj before.

The hajj, one of the five pillars of Islam, is required for all Muslims who are physically and financially able to go at least once in their lifetimes. Because of constraints on how many can participate, millions of Muslims around the world wait and save up for decades before they can perform the hajj, making this year’s effective cancellation especially devastating for those who were scheduled to attend.

The restrictions have also caused economic injury, wiping out the huge sums hajj pilgrims spend each year on travel agency packages, hotels and meals in Mecca and Medina and visa fees charged by Saudi Arabia.

Giving Your Number to Strangers? It’s Not Flirting;...

Black Behind the Wheel – The New York...

Past Into Present: 4 Journeys That Changed Us

How Crowdsourcing Aided a Push to Preserve the...