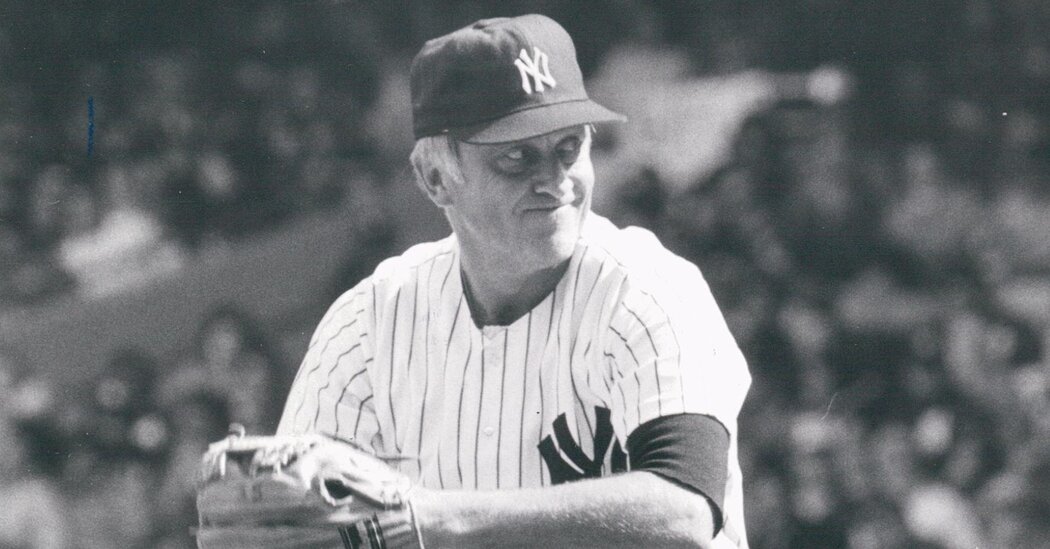 Phil Niekro, the Hall of Fame pitcher who confounded batters with his fluttering knuckleballs for 24 seasons, winning 318 games, mostly with mediocre Atlanta Braves teams, before retiring at the ripe age of 48, died on Saturday. He was 81.

His death, after a struggle with cancer, was announced by the Braves. He lived in Flowery Branch, Ga., about 45 miles northeast of Atlanta, but the Braves did not say where he died.

Niekro joined with his younger brother, Joe, who also threw knuckleballs and pitched in the majors for 21 seasons, to record 539 career wins, a record for two brothers. The previous mark, 529, had been held by Gaylord Perry, also a Hall of Famer, and his brother Jim.

A right-hander, like his brother, Phil Niekro (pronounced NEEK-row) threw a total of 5,404 innings, placing him No. 4 on the major league career list, without ever incurring a sore arm, allowing him to endure in Major League Baseball far longer than most other players.

Phil, who retired after the 1987 season, was inducted into the Baseball Hall of Fame in 1997. But for all of his achievements, he never made it to a World Series, his Braves teams reaching only the National League Championship Series twice, losing both times. Phil pitched for four teams and Joe for seven. They were teammates with the Braves in 1973 and ’74 and briefly with the Yankees in 1985.

Phil’s knuckleballs were actually thrown with two fingernails, which he allowed to grow unnaturally long. He pressed them into the baseball’s seams, held his wrist stiff and essentially pushed the baseball forward.

The idea was to deliver the pitches with no spin, allowing air currents to make them break up or down, in or out, at the last moment, keeping hitters off balance but often bedeviling his catchers as well.

Bob Uecker, who caught for Niekro in 1967, when Niekro was emerging as a leading pitcher, told Sports Illustrated in 1969 what that was like, drawing on the wry persona that he would later put to use as a baseball broadcaster.

“In those days, Phil had less control,” Uecker said. “Sometimes I’d know before he let go of it that it was going to get by me. I’d just start running and play it off the wall. At least I got to know a lot of the folks in the box seats.”

Niekro himself was not one to explicate his knuckleball, telling Sports Illustrated in 1994: “Nobody has ever given me a good, definite explanation as to why the ball does what it does. The thing that I feel sort of guilty about is that with every other pitch, you try to make the ball do something, spin it to make it curve or sink or sail. All I try to do is make the ball do nothing.”

Philip Henry Niekro was born on April 1, 1939, in Blaine, Ohio, a few miles from his family’s home in Lansing. He was the middle of three children of Joseph Niekro, a coal miner, and Henrietta (Klinkoski) Niekro.

The senior Niekro, who threw a knuckleball pitching in sandlot baseball, taught the pitch to Phil when he was 11 years old or so. (Joe, five years Phil’s junior, was too young to try it back then.) Phil threw his knuckleball and played basketball in high school and was signed by the Milwaukee Braves organization out of a tryout camp in July 1958 for a $500 bonus (about $4,500 in today’s money).

He made his major league debut with the Braves in 1964 and pitched almost exclusively in relief until 1967, the franchise’s second season in Atlanta, when he made 20 starts and led the N.L. in earned run average, at 1.87, while going 11-9.

Niekro was a four-time All-Star with the Braves, who released him after the 1983 season. He won 16 games for the Yankees in both 1984, when he was an All-Star once more, and in 1985, before being released by them as well.

He later pitched for the Cleveland Indians and Toronto Blue Jays before the Braves brought him back as their starter for their last home game of the 1987 season. He pitched into the fourth inning of a loss to the San Francisco Giants in his final major league appearance.

Niekro had a career record of 318-274 with an earned run average of 3.35, struck out a league-leading 262 batters in 1977 and led the N.L. in complete games and innings pitched four times. He pitched a no-hitter against the San Diego Padres in 1973 and had a league-leading winning percentage of .810 in 1982, when he was 17-4. He received a Gold Glove award for his fielding five times.

After his pitching career, Niekro was the manager and general manager of the Colorado Silver Bullets, a barnstorming women’s baseball team that played against men’s ball clubs, and he managed for the Braves in the minors.

His survivors include his wife, Nancy; his sons John, Philip and Michael; and two grandchildren. Joe Niekro died of a brain aneurysm in 2006 at 61.

Niekro recorded his 300th career victory pitching for the Yankees against the Blue Jays on the final day of the 1985 regular season, stopping them 8-0.

He threw fastballs, curves, screwballs and even “blooper” pitches — not a single knuckleball — until Tony Fernandez had doubled with two out in the ninth inning.

“I always wanted to pitch a whole game without throwing knuckleballs because people thought I couldn’t get people out without throwing them,” Niekro told The New York Times after that game, which he ended by striking out Jeff Burroughs on three knucklers.

As he put it, “I figured there was no other way to finish the game than using the pitch that got me there.”

‘This just has to get done’: Lawmakers push Trump to sign the relief bill.

Seahawks Defense Is an Asset Again in Division-Clinching...