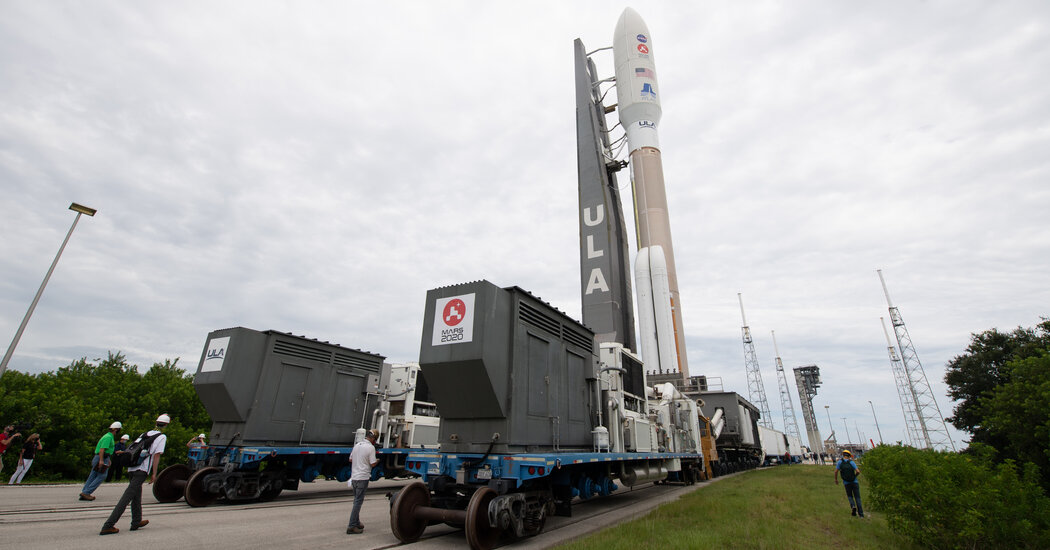 The final launch of the summer of Mars missions is nearly underway.

On Thursday, NASA hopes to send a robotic rover and a small experimental helicopter on a journey of six-and-a-half months to the red planet. It follows two earlier launches by the United Arab Emirates and China.

NASA was originally scheduled to lift off earlier in July, but had to overcome a number of technical delays that pushed back the launch. While it is last to leave, all three missions should arrive at the red planet at about the same time, in February.

When is the launch, and how can I watch it?

NASA’s Perseverance rover will lift off from the Cape Canaveral Air Force Station in Florida on Thursday at 7:50 a.m. Eastern time.

The launch, aboard a United Launch Alliance Atlas V rocket, will be streamed live by NASA on its website beginning at 7 a.m.

The rocket with the rover on top was rolled out to its launchpad on Wednesday, and NASA’s administrator, Jim Bridenstine, said that the mission is technically ready for launch.

Weather looked promising, with an 80 percent chance of favorable conditions for launch.

What is the Perseverance rover?

Perseverance is a car-size wheeled robot nearly identical in design to NASA’s previous Mars rover, Curiosity, which landed in 2012. However, Perseverance is headed to a different place — a crater named Jezero that was once a lake — carrying a different set of instruments. Curiosity was designed to look for habitable environments, and it found signs of a freshwater lake. Perseverance is to go a step farther and search for evidence of past life that might have lived in the lake at Jezero.

Perseverance is also carrying a couple of devices that are more fun than scientific: several cameras, which will record various views as the spacecraft zooms through the atmosphere en route to landing; and two microphones, which will be the first to record sounds on another planet.

It is carrying an experimental helicopter, too.

Yup, it’s called Ingenuity. The four-pound Marscopter is a technology experiment, and if it works, it will be the first powered flight on another planet. The rotors have to spin at 2,4000 revolutions a minute to generate lift in the thin atmosphere of Mars, just one percent as dense at Earth’s at the surface.

When will the mission arrive on Mars?

Every 26 months, Earth and Mars come close to each other, which allows the quickest, most efficient trip from Earth to Mars. If the launch does not occur by the middle of August, NASA would have to wait until the next opportunity, in 2022.

Where will Perseverance land, and why is it going there?

Jezero crater was filled with water about 3.5 billion years ago when Mars was warmer and wetter. From orbit, earlier NASA spacecraft spotted a dried-up river on one side of Jezero and an outflow channel can be seen on the other side. The sediments of a fan-shape delta can be seen where the river spilled into the crater. No one knows if anything ever lived on Mars, but if it did, Jezero would be a prime place to look, scientists decided.

What else is going to Mars this summer?

The Emirates Mars Mission successfully lifted off on a Japanese rocket on July 20.

The space program of the United Arab Emirates is modest, and its bid to join the ranks of countries that have reached Mars is part of an ambitious effort to inspire Emirati youth to take up careers in science and technology.

Its Hope spacecraft will orbit Mars for a number of years, helping scientists study the planet’s weather cycles.

The country’s space program has seen a number of successes in recent years, including two rovers that landed on Earth’s moon as well as a pair of space stations deployed in orbit. But its previous attempt to get to Mars in 2011 was lost when the Russian rocket it was riding on failed and burned up in Earth’s atmosphere.

The new Chinese mission includes an orbiter, a lander and a rover. While other countries have taken a staggered approach to visiting Mars — an orbiter first, then a lander, then finally a rover — China emphasizes that it will attempt to operate all of these components for the first time at once.

A fourth mission, the joint Russian-European Rosalind Franklin rover, was to launch this summer, too. But technical hurdles, aggravated by the coronavirus pandemic, could not be overcome in time. It is now scheduled to launch in 2022.

New Looks at the Fate of Foreigners in America, From the Privileged to the Most Vulnerable

Northern Right Whales Are on the Brink, and...

Pandemic Swells in South America, as the U.S....

Here’s How Coronavirus Could Raise Cities’ Risk for...

Why Restaurants Are Fed Up With Apps