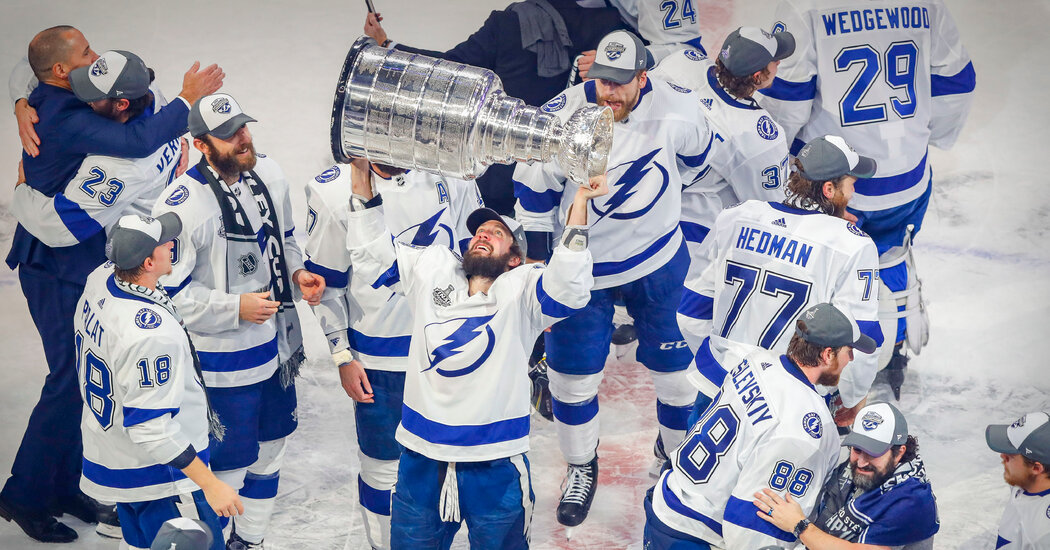 The N.H.L. season will begin Wednesday with some drastic modifications to its format and at least one delayed opener because of the impact of the coronavirus pandemic.

The myriad challenges of the pandemic will keep fans out of the stands at most arenas, expand rosters in the event of outbreaks and force the league to maintain flexibility amid volatile circumstances. Deputy Commissioner Bill Daly said Monday that he did not expect the league to have access to vaccines for players, staff members and other personnel this season.

Commissioner Gary Bettman said Monday that he expected losses from a lack of attendance to exceed $1 billion and for the league to lose more money than if it had canceled the season, though the player agent Allan Walsh called that characterization “a deliberate and intentionally misleading statement.” Attendance, Bettman said, accounts for about 50 percent of N.H.L. revenue.

There may not be a sense of normalcy until the playoffs, which will return to their usual format of 16 teams and four rounds of best-of-seven series. And though there will be no traditional January Winter Classic, there will be outdoor hockey in Nevada. Bettman said Lake Tahoe would host the league for the first time — with two games against a backdrop of snowy mountains, a gleaming lake and zero spectators. The Vegas Golden Knights will face the Colorado Avalanche there on Feb. 20, and the Philadelphia Flyers will play the Boston Bruins on Feb. 21.

As the puck drops this week, all eyes will be on the Tampa Bay Lightning in the East as they try to repeat their Stanley Cup victory, and on the Avalanche, who are preseason betting favorites for the Cup.

Vegas, which bolstered its roster at last year’s trade deadline and over the summer by signing the top defenseman on the market, is also among the top-tier contenders. The Toronto Maple Leafs added size and experience to a roster that was already brimming with scoring punch.

All 31 franchises will have to navigate an abbreviated season with long odds of being completed smoothly.

One team relocates, while all of Canada’s stay put.

Rather than the traditional 82-game schedule, each team will play 56 games. Additionally, each will carry three goalies and a taxi squad of four to six players in case of injury or a coronavirus-related absence.

The league eliminated cross-border travel because of restrictions between the United States and Canada. That necessitated realignment, with all seven Canadian franchises in the North Division and the 24 other franchises in three eight-team divisions. Teams will play divisional opponents exclusively, primarily within two-game sets in a single city, a format similar to Major League Baseball schedules.

Though the Canadian N.H.L. teams are staying put — unlike baseball’s Toronto Blue Jays and the N.B.A.’s Toronto Raptors, who had to find temporary homes in the United States to finish last season — there will be at least one relocation to start the season. Because of restrictions in Santa Clara County, Calif., the San Jose Sharks have made the Phoenix area their home.

Arizona, which has seen high case rates of late, was already home to the Coyotes, one of the few teams allowing fans into its games. Some clubs chose to bar spectators even though the local authorities would have permitted attendance.

In Florida, the Panthers are hosting a limited number of fans. But the Lightning, who did host a victory parade in September, have ultimately opted not to open the season with fans in attendance. Their opponent in the finals, the Dallas Stars, said they would allow roughly 5,000 fans per game.

The virus delays one team’s start.

However, Dallas fans will have to wait longer than most to see their team. Six players and two staff members tested positive for the coronavirus Friday, which meant they could return to competition no earlier than Jan. 19, according to the N.H.L. The Stars were scheduled to start their season with four road games in Florida beginning on Thursday, but those games have been postponed. The league is evaluating possibilities for rescheduling those games and potentially others, including the Stars’ Jan. 22 home opener.

The league said Tuesday that formal training camps had concluded with 27 players from nine teams testing positive, including 17 Stars.

Goalies shuffle, and even depart.

Several goaltenders were free agents in the off-season, and many changed teams. Henrik Lundqvist (Rangers to Washington), Braden Holtby (Washington to Vancouver), Corey Crawford (Chicago to the Devils), Devan Dubnyk (Minnesota to San Jose) and Craig Anderson (Ottawa to Washington) were among the veteran goalies to leave their longtime homes.

But both Lundqvist, who signed a one-year contract with the Capitals, and Crawford, who signed a two-year deal with the Devils, will not play this season and may never skate on N.H.L. ice again.

Lundqvist, 38, discovered he had a heart condition and had a successful five-hour, open-heart operation. He has been ruled out for the 2021 season. Crawford, who helped Chicago upset Edmonton in last year’s qualifying round, announced on Friday that he would be taking a leave of absence from the Devils. The next day, he announced his retirement.

During an off-season in which lucrative long-term deals were tough to come by, the three biggest paydays in terms of average annual value went to defenseman Alex Pietrangelo, wing Taylor Hall and defenseman Torey Krug.

Pietrangelo was lured from the 2019 champion Blues to the Vegas Golden Knights. Pietrangelo, who will turn 31 next week, had captained the Blues to their only Stanley Cup. He signed a seven-year contract worth $61.6 million, by far the largest of the off-season.

Even before Pietrangelo officially committed to Vegas, the Blues had found his replacement in Krug, a former Boston Bruin. Krug will earn $45.5 million over the next seven years, the second-largest total dollar figure from the off-season contracts.

Hall signed the deal with the second-highest average annual value. He won the Hart Trophy with the Devils in 2018 as the league’s most valuable player, but middling performances on poor teams earned him only a one-year deal, albeit at $8 million, from the rebuilding Buffalo Sabres.

After winning the Stanley Cup, Tampa Bay immediately faced a salary cap crunch, but the problem was resolved in a less than ideal way. The team’s top forward, wing Nikita Kucherov, sustained a hip injury that will sideline him for the regular season. The Lightning were able to retain defenseman Mikhail Sergachev and forward Anthony Cirelli in part by placing Kucherov on long-term injured reserve, which allowed them to exceed the upper limit of the salary cap. They hope Kucherov will return for the playoffs.

Two other star forwards, Dallas’s Tyler Seguin and Boston’s David Pastrnak, also have hip injuries. Seguin has the more severe injury, which is expected to keep him out of action until at least April.

A flat salary cap, internal financial constraints and other factors will lead teams to accelerate a trend in the N.H.L.: leaning on entry-level players. A well-developed young player can become a significant contributor, or even a star, for a salary not much above the league minimum, and for up to three years.

The year’s most prominent hopefuls to win the Calder Trophy as rookie of the year include two Rangers: Alexis Lafreniére, the top selection in the 2020 draft, and Igor Shesterkin, a goaltender who debuted last season. Shesterkin has played fewer than 25 career games, so he is still classified as a rookie.

Three stars at the World Junior Championships, which became a preseason event rather than a midseason one, could make an impact as soon as this season. The German forward Tim Stützle, drafted No. 3 over all by Ottawa in 2020, and the Canadian center Dylan Cozens, selected at No. 7 in 2019 by Buffalo, dominated at the tournament. The United States won the tournament behind Trevor Zegras, the Anaheim Ducks center prospect who led the tournament in scoring and tied for the career lead in assists and points by an American.

There are also some older rookies with an opportunity to thrive, most notably Minnesota wing Kirill Kaprizov, who was a fifth-round pick in 2015 but competed in Russia until 2020. He was the youngest player on the Olympic Athletes from Russia’s gold medal team in 2018. Kaprizov led the Kontinental Hockey League, regarded as the No. 2 league in the world, in goals in the 2018-19 and 2019-20 seasons.

Amid revenue uncertainty and at least two years without salary cap expansion, teams must also consider the expansion draft. After this season, the N.H.L. will welcome its 32nd franchise, the Seattle Kraken.

The Kraken expect to have nearly identical terms as the Vegas Golden Knights had in 2017. Vegas had access to an extraordinary level of talent in the expansion draft and in the overall pool. The Golden Knights reached the finals in their inaugural season and have won five postseason series in the past three seasons, placing them among the most competitive teams in the league.

While Seattle may take a longer view — Vegas now has an older roster; Seattle has firm footing in a more established sports market; and Kraken General Manager Ron Francis built primarily through the entry draft in the past with Carolina — the Kraken will have a strong impact on the league.

Players on entry-level deals as well as 10 to 11 protected players from each team were ineligible to be selected by Vegas. That left plenty of room for teams to incentivize Vegas to select unwanted contracts by offering future assets, on top of talent in the unprotected pool. This time, every team but Vegas will lose a player in the expansion draft. Not only will the process affect Seattle’s fortunes, but it also could shape the way 30 teams organize their rosters and make personnel decisions.

A Top Equestrian Paralyzed in an Accident Sees...

Steelers’ Defeat Was a Comeback Wrapped in a...

Stanford’s Tara VanDerveer Is on Verge of Career...

One Division, Seven Canadian Teams and a Lot...

What Was the Jets’ Gregg Williams Thinking on...

Nike and UEFA Express Concern Over Crisis at...