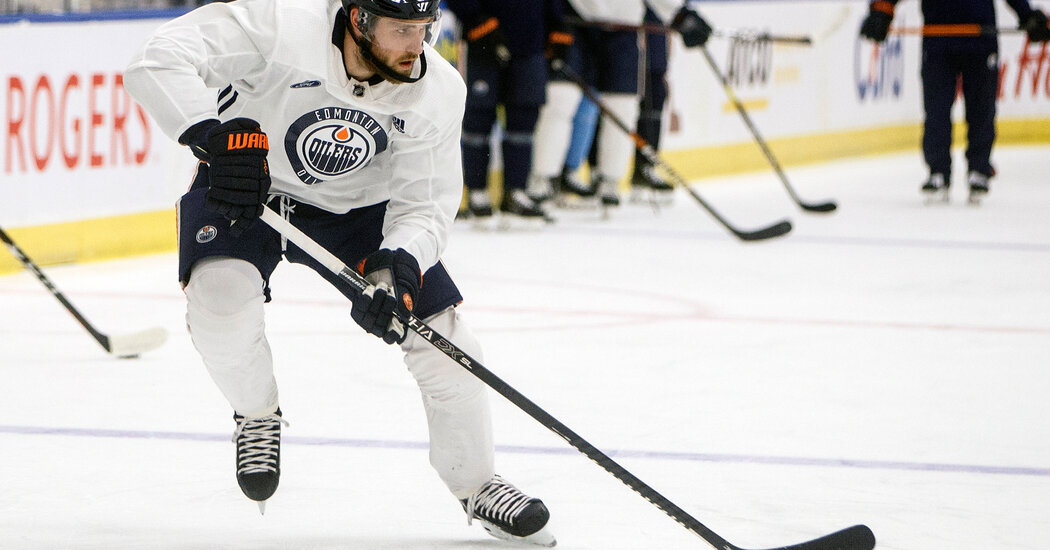 The N.H.L. announced finalists for its major awards last week, and it was both a reminder of how long ago those performances were and how compelling the postseason tournament will be if players can get back to that level of play quickly. The awards will be based on play before the league was shut down in March because of the coronavirus pandemic.

The Edmonton Oilers have racked up 10 Hart Trophies since joining the N.H.L. in 1979. Wayne Gretzky won the award eight times, Mark Messier once with Edmonton and Connor McDavid won it in 2017. Goalie Grant Fuhr was once a finalist.

“Amazing players, legends of the game no question about it,” Edmonton forward Leon Draisaitl said. “It’s a big honor to be part of that group for sure.”

No one exemplified that connection more this season than Draisaitl, who is a finalist for both the Hart Trophy, for most valuable player, and the player-voted award for most outstanding player, alongside Rangers wing Artemi Panarin and Avalanche center Nathan MacKinnon.

Draisaitl was productive with and without his teammate McDavid, leading the league in total points and points per game, points percentage and time on ice for a forward.

Matchup to Watch: No. 5 Edmonton Oilers vs. No. 12 Chicago Blackhawks (best-of-five series starts on Saturday)

The Oilers (37-25-9) tightened defensively under Coach Dave Tippett, but also have plenty of firepower to trade goals with the run-and-gun Blackhawks (32-30-8), who are led by the three-time Stanley Cup champions Jonathan Toews and Patrick Kane.

Bruins Awards Add Up to a Cup?

The Boston Bruins (44-14-12) already had the Presidents’ Trophy, given to the team with the most points, and right wing David Pastrnak won the Maurice Richard Trophy as the league’s top goal scorer. But the Bruins racked up more recognition for the league’s subjective honors, too: Coach Bruce Cassidy joined Alain Vigneault of the Philadelphia Flyers and John Tortorella of the Columbus Blue Jackets as Jack Adams Award finalists for coach of the year.

Goalie Tuukka Rask is a Vezina Trophy finalist, awarded to the league’s top netminder. Rask won the award in 2014. Center Patrice Bergeron became a Selke Trophy finalist for a record ninth time and could win his record fifth trophy, given to the league’s top defensive forward. But after pushing the St. Louis Blues to a Game 7 in last year’s Stanley Cup finals, it’s probably safe to say there is only one trophy the Bruins are focused on lifting.

Matchups to watch: Boston thought it had locked up home ice through the playoffs, winning 16 of its previous 20 games, before the pandemic pause and the reformatting of the postseason. No team will be playing for its life when the Eastern Conference round-robin tournament begins on Sunday, but Boston will face Philadelphia (Sunday), Tampa Bay (Aug. 5) and Washington Aug. 9) to determine seeding in the first-round. Against those teams this season, the Bruins won just three of 10 games, losing four in shootouts.

Artemi Panarin Wants His Just Due

Rangers winger Artemi Panarin’s late push helped make him a first-time finalist for the Hart and Lindsay hardware while helping the team (37-28-5) come to within one game of a wild-card spot before play was halted. After signing the most lucrative contract of any free agent since 2013 last summer, he accumulated 61 points in his final 41 games. That was even more remarkable for a player whom N.H.L. teams passed over multiple times before he signed with the Blackhawks in 2015 at age 23.

“I would like to thank all the G.M.s for not choosing me in the draft because it allowed me to choose the team where I wanted to play that played my style of hockey,” Panarin, a Russian, said through an interpreter last week.

Matchup to watch: No. 6 Carolina Hurricanes vs. No. 11 Rangers (starts Saturday)

The Rangers should have a healthy Igor Shesterkin between the pipes for the postseason, though the team declined to officially name him the starter over Henrik Lundqvist. Carolina (38-25-5) has its own talented Russian wing, Andrei Svechnikov, and the star defenseman Dougie Hamilton back healthy for the last hurrah of their veteran leader, right wing Justin Williams.

Skilled defensemen have become a must-have for Cup contenders since the league’s mid-aughts scoring boom. But Washington’s John Carlson and Nashville’s Roman Josi — two finalists for this year’s Norris Trophy, awarded to the league’s best all-around defenseman — have long been understated among their blue-liner peers.

Josi’s blend of smooth skating, positioning and deceptiveness helped him to a career-high 65 points this season. Still, Carlson may remain the favorite, as he led the league’s defensemen in points (75) and assists (60).

The Calder Trophy, awarded to the league’s top rookie, is also likely to be awarded to a defenseman. In his first full season, Colorado defenseman Cale Makar challenged the rookie points record for defensemen before play stoppage, ultimately finishing with 50, second among rookies only to Vancouver defenseman Quinn Hughes (53), his competition for the award.

Matchup to watch: No. 7 Vancouver Canucks vs. No. 10 Minnesota Wild (starts Sunday)

Vancouver boasts not only a Calder favorite but also last year’s winner, center Elias Pettersson, nicknamed the Alien for his otherworldly playmaking ability. The young Canucks will face the Minnesota Wild, who had turned their season around sharply near the time of stoppage.

Can Hellebuyck Get Past the Vezina Veterans?

The other finalists are last season’s winner, Tampa Bay’s Andrei Vasilevskiy, and Boston’s Rask. Hellebuyck and Vasilevskiy were ranked first and third in games played and shots against. Rask played fewer games, but led all starters in save percentage and all goalies in goals-against average.

The Jets pulled out a 2-1 overtime win in the outdoor Heritage Classic over the Flames in October, their only meeting this season.

In a regular season that began a cultural shift in the sport and ended with an abrupt closure, not all hockey news was bad.

After missing the playoffs last year and wobbling through October, the Flyers were the hottest team in the N.H.L. when play was suspended, having won nine of their final 10. The Flyers were galvanized by forward Oskar Lindblom’s battle with a rare form of bone cancer. Lindblom was told he had Ewing’s sarcoma in December and completed treatment in July, in time to be named to the Flyers’ 31-man roster for Toronto. Lindblom also signed a three-year, $9 million contract extension with Philadelphia this month.

Lindblom, a finalist for the Masterton Trophy for perseverance, became an inspiration around the hockey world, with “Oskar Strong” T-shirts sold to benefit cancer research.

“The support that he got from his teammates and we got from other players on other teams coming in, talking with people that they knew and buying the T-shirts. It was a different season for me,” Vigneault said. “The fact that he’s coming out of this and he’ll be able to play again makes this season extra special.”

For the N.B.A., a Long, Strange Road Trip to the Finals

Gymnasts Push for Lasting Change After a Coach...

The N.F.L. Figures Out How to Team-Build From...

M.L.B. Employees Become the Subjects of a Huge...

Some Sports May Have to Skip This Year,...