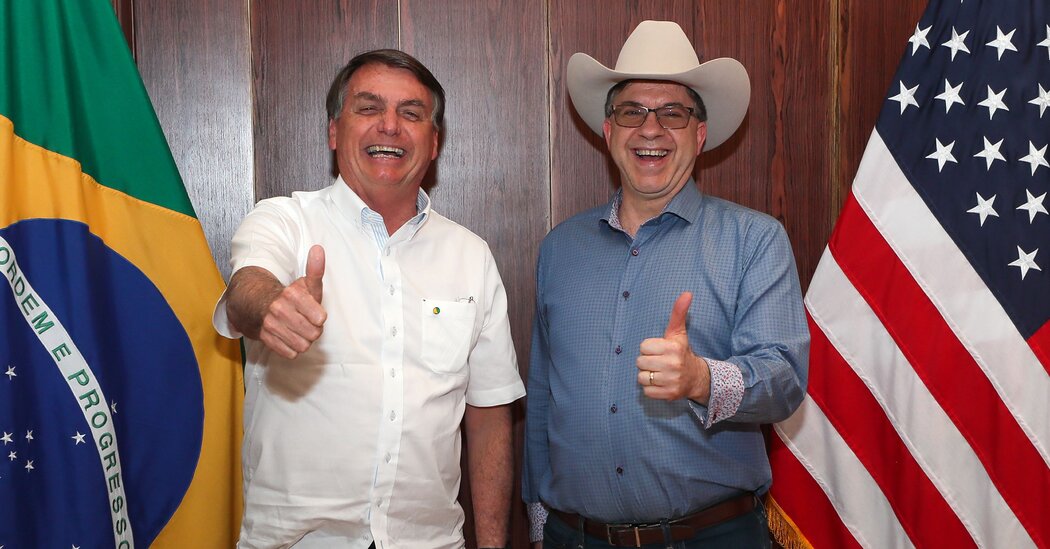 RIO DE JANEIRO — Members of the House Foreign Affairs Committee said Friday they were “extremely alarmed” by assertions that the American ambassador in Brazil had signaled to Brazilian officials they could help get President Trump re-elected by changing their trade policies.

In a letter sent Friday afternoon, Committee Chairman Eliot L. Engel demanded that the ambassador, Todd Chapman, produce “any and all documents referring or related to any discussions” he has held with Brazilian officials in recent weeks about their nation’s tariffs on ethanol, an important agricultural export for Iowa, a potential swing state in the American presidential election.

The committee’s letter was sent in response to reports in the Brazilian news media this week saying that Mr. Chapman, a career diplomat, made it clear to Brazilian officials they could bolster Mr. Trump’s electoral chances in Iowa if Brazil lifted its ethanol tariffs.

Eliminating tariffs would give the Trump administration a welcome trade victory to present to struggling ethanol producers in Iowa, where the president is in a close race with his Democratic rival, Joseph R. Biden Jr.

The House committee said it was opening an inquiry into the matter.

The State Department said Friday afternoon in an emailed statement that “allegations suggesting that Ambassador Chapman has asked Brazilians to support a specific U.S. candidate are false.”

The statement added: “The United States has long been focused on reducing tariff barriers and will continue do so.”

The O Globo newspaper published a story on Thursday saying Mr. Chapman had underscored “the importance to the Brazilian government of keeping Donald Trump” in office. Mr. Bolsonaro, a far-right leader, has made closer alignment with the Trump administration his top foreign policy priority.

A competing newspaper, Estadão, published an article Friday saying its reporters independently confirmed that the ambassador framed his argument against tariffs in partisan terms. The article said the Brazilian officials who met with Mr. Chapman rejected the appeal, declining to be drawn into the American presidential battle.

Neither article named its sources. But Alceu Moreira, a Brazilian congressman who heads the agricultural caucus, told The New York Times in an interview that Mr. Chapman had made repeated references to the electoral calendar during a recent meeting the two had about ethanol.

He said that Mr. Chapman did not explicitly urge him to help the Trump campaign or bring up the contest in Iowa — but that the American ambassador did tie the ethanol issue to the election.

“He said, ‘You know, we have elections in the United States, and that this is very important,’” Mr. Moreira said, recounting their conversation. “He said this four or five times.”

In the letter, Mr. Engel said that if Mr. Chapman had pressured the Brazilians to help the Trump campaign, it could be a violation of the Hatch Act, a 1939 law that bars federal officials from engaging in certain partisan activities.

“These statements are completely inappropriate for a U.S. ambassador to make,” Mr. Engel, a Democrat from New York, wrote in the letter, which was also signed by Representative Albio Sires, who chairs the Subcommittee on the Western Hemisphere, Civilian Security and Trade.

The letter called on Mr. Chapman to “reassure Congress and the American people that our Ambassador to Brazil is truly representing the interests of the United States and not the narrow, political interests of President Trump.”

Promoting favorable terms for American industries abroad is a core priority for American ambassadors. But American diplomats are reminded in election years to steer clear of any actions that might reasonably be construed as partisan.

The committee’s letter also took issue with Mr. Chapman’s defense of a video promoting the Trump campaign that Eduardo Bolsonaro, a federal lawmaker and a son of President Jair Bolsonaro, posted Sunday on Twitter.

The video ends with a slide that says “Trump 2020: The Great Victory.”

Asked about the video in an interview with O Globo, Mr. Chapman said he saw no problem with Eduardo Bolsonaro’s endorsement.

“I’m a big defender of freedom of expression,” Mr. Chapman told the newspaper. “And everyone is free to say who they like and who they’re against as they see fit; I’m not going to tell someone they can’t speak in favor or against my president.”

Mr. Engel and Mr. Sires, a Democrat from New Jersey, said the ambassador should have responded differently.

“While Mr. Bolsonaro has the right to speak freely, it is simply not appropriate for sitting government officials — in any branch of government — to promote the campaigns of candidates in the United States,” the congressmen wrote. “We frankly believe that you should know better.”

Eduardo Bolsonaro is the rare Brazilian official who has openly supported lowering ethanol tariffs for American sellers. In a video he posted last September, he said taking a hit on ethanol would be a boon for Brazilian exporters of meat and sugar by improving the chances of a free-trade agreement between the two countries.

“That could bring so many benefits to us as Brazilians,” said the younger Mr. Bolsonaro, an ardent supporter of Mr. Trump who wore a “Make Brazil Great Again” baseball cap during a visit to the White House last year.

The United States has long pushed Brazil to lower tariffs on ethanol. Those talks gained a new sense of urgency in recent months as the coronavirus pandemic led to plummeting demand, and American ethanol sellers were squeezed by the trade dispute between Beijing and Washington.

Currently, American ethanol companies can sell up to 750 million liters of ethanol to Brazil per year without paying tariffs. Any sales beyond that are subject to a 20 percent tax. The Brazilian government raised the tariff-free cap last September from 600 million liters — a gesture intended to give Brazilian sugar producers greater access to the American market.

Mr. Trump hailed that move, calling it “great progress for our Farmers.”

But Washington did not make good on the sugar access, which left the Brazilians feeling embittered.

The current ethanol tariff framework is set to expire in August. If the two countries don’t reach a deal, Brazil will apply a 20 percent tax to all ethanol imports, a blow to an industry that is pleading for government bailouts.

Mr. Moreira, the Brazilian congressman who heads the agricultural caucus, said he told Mr. Chapman that Brazilian politicians also had political considerations to consider, given coming municipal elections in September. Ethanol producers in Brazil’s northeast states would look dimly on tariff rules that put them at a competitive disadvantage.

“Is the ethanol producer very important electorally speaking? Yes, very important,” Mr. Moreira said. “We very much like the American people, but we like our people more.”

Congressman Arnaldo Jardim, who leads a Brazilian congressional bloc that supports ethanol producers, said Mr. Chapman has been negotiating with a sense of urgency as the deadline approaches.

“Let’s just say he’s putting pressure” on Brazilian officials, said Mr. Jardim, adding that he had not personally met with the ambassador about this issue, but regularly speaks to several officials who have. “He’s saying that this is paramount for the United States and paramount for Trump.”

Orlando Ribeiro, who heads the department of commercial and international relations at Brazil’s Ministry of Agriculture, said that negotiators had hoped to reach a deal on ethanol tariffs before the August deadline that took into account the interests of all stakeholders.

Barring that, he said he feared Mr. Trump and Mr. Bolsonaro could hash out a deal over the phone at the last minute.

“What could happen is that on the eve, Trump could call Bolsonaro and they might decide to lift all” tariffs, he said.

Canada’s Key Role in Creating a Once Awaited Vaccine

Where There’s a Will in England, There’s a...

Russia Was Ready to Celebrate a Glorious Past....