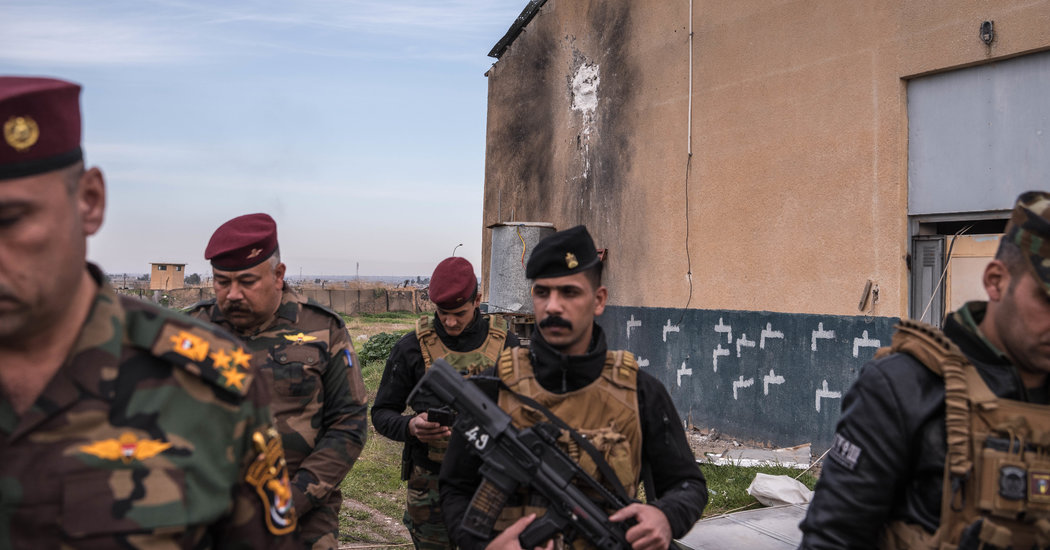 BAGHDAD — Iraqi forces raided an Iranian-backed militia suspected of carrying out a spate of rocket attacks against American forces, making good on the new prime minister’s promise to crack down on armed groups that have strained relations with the United States.

The raid overnight Thursday on a brigade headquarters of the militia, Khataib Hezbollah, was intended to “to send a message that there is no red line and no one is above the law and everyone must be subject to it,” Gen. Yahya Rasool, the military spokesman for Prime Minister Mustafa al-Kadhimi, said Friday.

There have been at least four attacks on Iraqi military bases and on Baghdad’s Green Zone in the past two weeks. The attacks were thought to be aimed at American forces on the bases and the American Embassy, which is in the fortified Green Zone.

The United States blamed the militia for a rocket attack in December that killed an American civilian contractor, and one in March that killed three service members, including two Americans and a Briton. Khataib Hezbollah denied responsibility for both attacks.

The United States carried out airstrikes against the group each time. The airstrikes in January set off a series of events that pushed the United States to the brink of war with Iran and led to a resolution in Iraq’s Parliament to expel American forces.

Mr. al-Kadhimi took office in May promising a fresh approach, including cracking down on government corruption and strengthening the rule of law. He also promised to protect foreign diplomatic missions and international forces serving at the request of the Iraqi government.

Seen as closer to the United States than his predecessors, he opened a strategic dialogue with Washington this month aimed in part at resetting the size and mission of American troops in Iraq and obtaining commitments for economic aid.

With the raid on Khataib Hezbollah, he became the country’s first leader to move against one of the Iranian-backed armed groups.

Iraqi counterterrorism forces detained 14 members of the militia, including one man they said had been involved with previous rocket attacks and was believed to be planning another.

The armed groups, which were formed as volunteer militias to help fight the Islamic State in 2014, became national heroes in that war, which ended in 2018. Since then, many have proved an invaluable ballast to the government’s security forces, but a few have presented serious problems.

Of the more than 20 militias, only a handful have close ties to Iran. But those groups, including Khataib Hezbollah, have become the most powerful. Most have political wings in the Iraqi Parliament where they often push Iran’s interests.

Since 2017, the militias have been regularized and they now receive salaries, weapons and training from the Iraqi government.

They ostensibly report to the prime minister but in practice maintain a great deal of independence. The legal status of some of these groups is murky because they are at once part of the government’s security forces, but also flout Iraqi law.

Iran’s close ties to the militias as well as to Iraq’s previous political leaders inhibited efforts to move against the groups when they attacked Iraqi forces and the Green Zone. The powerlessness of the Iraqi government in the face of the Khataib Hezbollah was clear in January when several thousand militia members marched on the Green Zone after the United States bombed Khataib Hezbollah bases in western Iraq.

Members of the group vandalized the wall surrounding the U.S. Embassy and set fire to some of the embassy guard posts. The prime minister then, Adel Abdul Mahdi, was slow to use force to protect the embassy, and the militia members left only after he promised to push legislation expelling the American military.

Parliament passed a nonbinding resolution demanding the departure of all international forces from Iraq, which has not yet been implemented.

While it is unclear what charges, if any, will come from the raid on Thursday, officials said it sent a clear message to the militias.

“These parties do not want to be part of the state and its obligations and seek to remain outside the authority of the commander in chief of the constitutional and legal armed forces,” the Iraqi Joint Command said in a statement on Friday.

Moreover, analysts said, it sent a signal to Iraqi law enforcement that the new prime minister was serious about enforcing the law.

“Even if this operation does not lead to a legal or judicial result or it ends with a political settlement or a judicial settlement,” said Hosham al-Hashimi, an Iraqi security analyst, “it still has given the necessary message to the security forces and the judiciary to allow them to overcome the barrier of fear made by these armed groups.”

Make Cornmeal Muffins for Your Next Breakfast Treat

Ukraine Cannot Stand Up To Russia Without A Modern Electric Grid

Is Britain Undercounting the Human and Economic Toll...

Coronavirus Fears Terrify and Impoverish Migrants in the...

Trump Says He Told Navy to ‘Shoot Down’...

On the Road With the French Foreign Legion

Spain’s Villages Wage a Lonely Fight Against the...

When Pet Owners Fall Ill With Coronavirus, What...