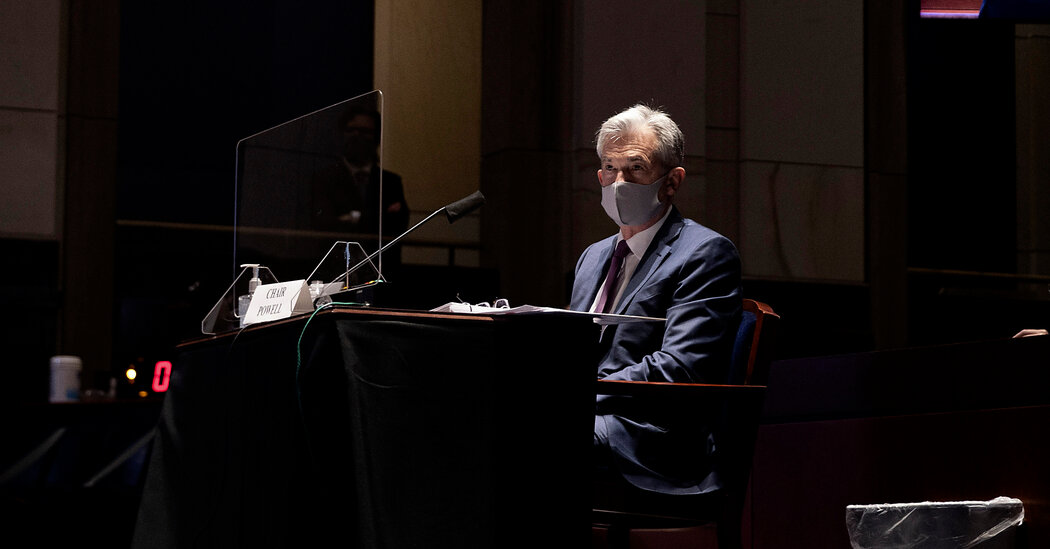 WASHINGTON — Pacific Investment Management Company runs a hedge fund registered in the Cayman Islands, a common structure for avoiding certain U.S. taxes. But when a profit opportunity arose from the ashes of America’s coronavirus crisis, that international location did not stop it from seizing the moment.

The Federal Reserve opened a highly anticipated emergency lending program in June, a revamped version of one that handed sophisticated investors double-digit returns during the 2008 financial crisis. The 2020 version is backed by congressional funding, and the rules stipulate that only American companies can participate as borrowers. For Pimco’s offshore fund, there was an easy way to still benefit.

The offshore fund is invested in an entity registered in Delaware and tied to the larger firm, which is based in Newport Beach, Calif. That entity, which investment managers can use to make transactions, also has backing from the U.S.-based versions of the Pimco hedge fund. It turned around and borrowed $13.1 million from the Fed program by pledging a bundle of debt as collateral. Investors in the Pimco hedge fund ultimately stand to profit from the transaction.

The Pimco example is not unique — other foreign investors have put money into U.S.-based funds that are tapping the Fed program. That they found a way to participate in a program restricted to American borrowers highlights that financial firms are looking to make money from the Fed’s market rescue programs, even if doing so means maneuvering around congressional limitations on eligibility.

The Fed’s program is intended to keep credit flowing through the economy, but its design has provided an opportunity for global financial players to profit from an initiative backed by taxpayer funding. That side effect could draw further scrutiny to the Fed’s rescue efforts, which are already prompting questions from lawmakers about who benefits, and on what terms.

The lending programs “drag the Fed into political crossfire,” said Mark Spindel, chief investment officer at Potomac River Capital and an author of a book on the politics of the Fed. “The Fed is seen as the honest broker in town — but just because you’re the honest broker today, doesn’t mean you’re not going to face questions down the road.”

The goal of the Fed program in question, known as the Term Asset-Backed Securities Loan Facility or TALF, is to bolster a critical corner of U.S. debt markets, one where loans are bundled and sold off to investors who are willing to take on risk in exchange for interest payments. That helps to keep the market for commercial mortgages functioning, and allows student loans and credit card debt to continue flowing to end-users.

The program was not created to make money for investment vehicles or the investors they represent. But because of the way TALF works, financial firms like Pimco’s hedge fund can make a profit from it.

It operates by encouraging investors to buy securities built on bundles of consumer and business debt — called asset-backed securities — and offering them as collateral for a cheap loan from the Fed. Firms can borrow directly from TALF, or like Pimco’s fund did, they can set up an investment vehicle to do the same thing.

A hedge fund like Pimco’s can put money into a U.S.-based vehicle, which then buys asset-backed securities using some combination of cash and short-term loans. The investment vehicle takes the securities to the Fed and gets a TALF loan.

Those TALF funds can be used to pay back whatever the investment vehicle borrowed to buy the asset-backed securities, so that its holdings are funded mostly by the cheap Fed loan, and a sliver of its own money (what is known as a “haircut” in financial parlance). It essentially earns the difference between what it makes in interest from the securities and what it is paying on the Fed loan.

The Fed has so far released detailed data only on TALF’s first round of loans, though the program has since finalized another, larger round. In all, it had made $937 million in loans as of last week, mostly against commercial mortgage and small business loan-backed securities. A third round closes on Thursday, and the Fed will most likely release additional data in mid-August.

Pimco’s Cayman Islands-based fund, which has borrowed via a U.S.-based entity called TOCU IX, is one of several foreign investors using an American investment vehicle to gain access to TALF. The pension plan of the Oxford University Press Group will tap the program through a fund set up by the New York-based investment manager MacKay Shields. A Singapore-based fund is a material investor in an offering by the giant financial firm BlackRock, according to the Fed’s first round of detailed disclosures.

The fact that some investors based overseas can make money from TALF does not break Congress’s rules, but it may fall shy of what some lawmakers intended. They specified that loans, advances and asset purchases made under the Fed’s programs should be restricted to “businesses that are created or organized in the United States or under the laws of the United States.” But they said nothing about who could ultimately benefit.

“There are going to be people who focus on this like a laser,” Peter Conti-Brown, a Fed historian at the University of Pennsylvania’s Wharton School, said of the fact that foreign investors in some cases benefit from Fed programs. But the reality, he pointed out, is that financial markets are global.

“Others are going to say that there’s no way to provide liquidity without benefiting international counterparties.”

And while Pimco’s fund and other foreign investors may profit by participating in the program, their investment is also helping to keep more money flowing into the Fed’s program, smoothing over U.S. securitization markets.

That reality has presented a challenge for the Fed, which has had to walk a fine line between creating emergency programs that are effective while also making them politically palatable. Lawmakers want the Fed to help the economy, but have also warned the central bank against allowing companies to take advantage of taxpayer-backed funding.

When Republicans and Democrats were hammering out the details of their coronavirus rescue package in March, congressional leaders agreed to give the Treasury Department $454 billion to back up Fed emergency programs.

The Fed requires a Treasury backstop for many of those efforts, to insure against losses in case borrowers default. But because the Fed did not expect to lose every dollar it lent out, it could use the $454 billion to field a huge rescue: potentially more than $4 trillion in loans to businesses, states and cities.

The ability to supersize the coronavirus response package was an attractive proposition. But many lawmakers in both parties were wary about handing the Fed and the Treasury so much money. Many remembered the 2008 bank bailouts and the bad taste they had left behind. They did not want a repeat.

So Steven Mnuchin, the Treasury secretary, and key lawmakers agreed to terms that attached strings to the funding. Companies borrowing direct loans might be asked to try to maintain their payroll. Those who borrowed directly would also be banned from making dividend payments, and executives would face compensation limits. Only U.S. companies could borrow.

Those requirements are generally guidelines rather than binding rules, given the way the programs work. The Fed has found itself being hammered on both sides — some lawmakers have questioned whether the central bank is precluding companies from using its programs by being too strict, while others have warned it against letting big corporations and Wall Street firms benefit.

Foreign investor participation in the TALF program could raise similar questions from lawmakers and the oversight groups set up to police where the funds are going. Mr. Conti-Brown and others say that while Congress gave the Fed the room to make design choices, that will not insulate the central bank from critique.

The fact that the Fed has discretion “is a byproduct of political compromise,” Mr. Conti-Brown said. But “the Fed is always open to criticism down the road.”

Why Sofas? These Books Explain the Joys and...

Photojournalists Struggle Through the Pandemic, With Masks and...

Dealing with returns could be bigger burden for...

A Close Look at a Fashion Supply Chain...

American corporations are bingeing on debt in the...