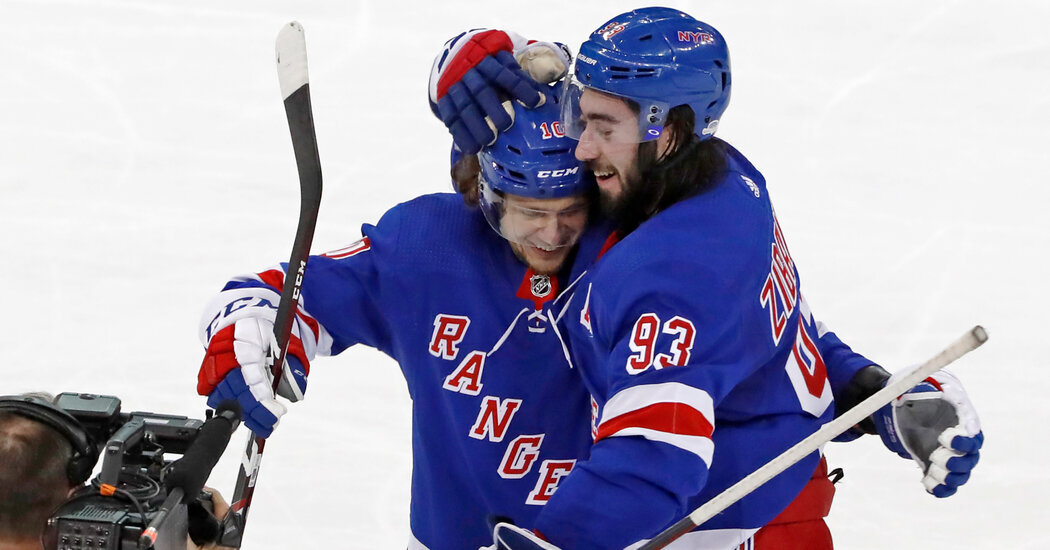 After a four-month pandemic pause to the N.H.L. season, the Rangers and the Islanders find themselves at the same point — with a berth in a play-in round in the league’s expanded playoffs, which begin this weekend.

That did not seem likely way back when the regular season was still in progress, with the two teams going in opposite directions. The Rangers won 12 of 15 games from Jan. 31 to Feb. 27, which vaulted them into the chase for their first playoff berth since 2017. The Islanders had slid into wild-card territory before play was halted on March 12, winning two of their previous 10 games.

Those results now amount to ancient history for the rivals, who face each other in an exhibition game on Wednesday in Toronto as they work their way into playoff shape.

What to expect in terms of the caliber of play is anyone’s guess in this unusual postseason, but after months of planning for this phased return, Coach Barry Trotz of the Islanders said he thought the first playoff games would be a cathartic, if frenzied, release.

“It probably will be a lot of chaos in that first 10 minutes of Game 1, exciting bad hockey and emotional hockey,’’ Trotz said on a conference call with reporters last week.

The major challenge now for the 24 playoff teams — 16 of which are competing in the qualifier round — will be revving up to postseason-level intensity from the layoff. Teams had two weeks of training camp before traveling to Toronto and Edmonton to acclimate to the playoffs’ two host cities.

“It’s kind of like trying to jump on a speeding train in a lot of ways,’’ Rangers wing Chris Kreider said last week. “But it’s like that for everybody.”

The Rangers will rely on Artemi Panarin, a Hart Trophy finalist with 95 points in his first season with the team, and Mika Zibanejad, who scored five of his team-leading 41 goals on March 5.

Coach David Quinn has said he will not name a starting goaltender until Friday or Saturday, when the series starts against the Hurricanes, whom the Rangers defeated four times in the regular season. It seems very likely that Igor Shesterkin, 10-2-0 in his rookie season, will be the team’s top goaltender to start the playoffs. But Alexandar Georgiev and Henrik Lundqvist could vie for playing time in a condensed schedule.

For the Islanders, who reached the second round of last season’s playoffs, their first year with Trotz behind the bench, the difference between a standard postseason and the new format will be the first hurdle to clear.

“This is going to be a challenge mentally,’’ Anders Lee, the Islanders’ captain, said. “Going to a hub city, staying in a hotel and having that bubble and quarantine life — none of us have been through that. The hockey stuff will fall into place.”

Forward Cal Clutterbuck, who recovered from surgery after his left wrist was sliced by a skate blade in December, said the difficulty of the task ahead is apparent. His team will have to win 19 games over five rounds to be champion. The Stanley Cup finals are expected to begin Sept. 20.

“I know for a fact the guys who win the Stanley Cup will feel an immense sense of accomplishment because this, in a lot of ways, is more difficult,’’ he said. “You’re trying to get to that level after a standstill of three and a half to four months, and you have to play an extra series. It was already the hardest trophy to win. It just got a little bit harder.”

Gary Bettman, the N.H.L. commissioner, said that even bringing these unorthodox playoffs to fruition amid a pandemic was a victory unto itself.

“If there’s any point where I’m going to feel substantial emotion, it’ll be a sense of relief when I get to present the Stanley Cup,” Bettman said. “This has been, as I think I indicated before, an extraordinarily involved, difficult and unusual circumstance.”

Booker Prize 2020: Who is nominated for the prize? Hilary Mantel among names – FULL LIST | Books | Entertainment

8 Factors in the N.B.A.’s Return That May Upend Expectations

More Than $6 Million in Relief Coming for...

LeBron James and Other Stars Form a Voting...

Who Should Bear the Financial Brunt of the...

The Milwaukee Bucks Are Ready for a Long...

An Ex-Steeler’s Recount of a Hard Hit Triggers...