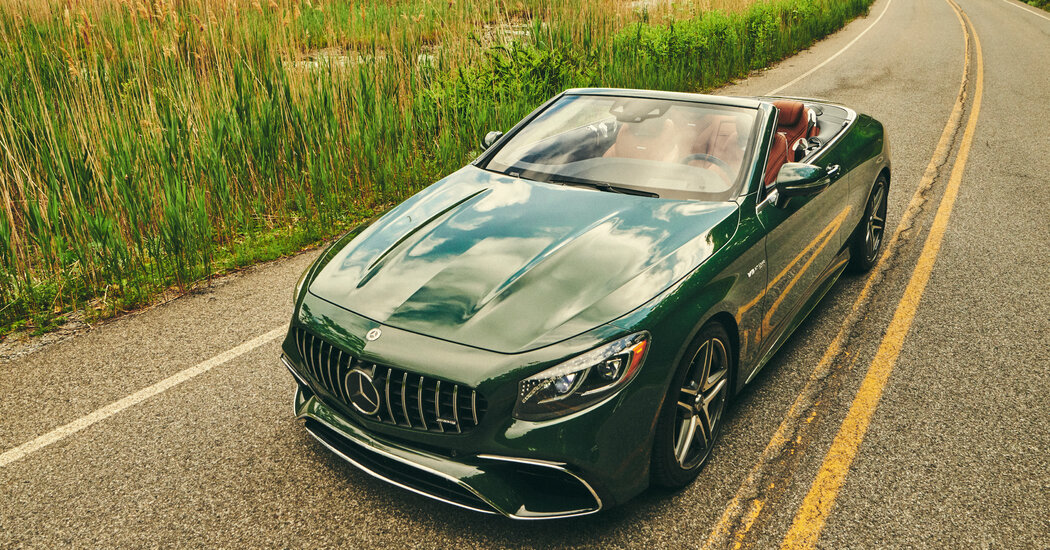 When Hollywood needs an allusion to freedom, romance or rebellion, it puts its hero in a convertible: Dustin Hoffman carving up traffic in an Alfa Romeo Duetto Spider, racing to bust up a wedding in “The Graduate.” The 1966 Ford Thunderbird in “Thelma and Louise,” frozen in flight above the Grand Canyon in the title pair’s climactic act of outlaw defiance. And Grace Kelly, in white gloves and a signature coral scarf, driving Cary Grant to distraction in a Sunbeam Alpine in “To Catch a Thief.”

Rebellion, apparently, is out, at least on wheels. A revival in the 1990s was led by a pint-size gymnast from Japan: the Mazda Miata roadster, a homage to its British and Italian forebears, but with exponentially better reliability. But convertibles’ market share has now tumbled by two-thirds since 2006, to 0.6 percent, according to IHS Markit.

Cinematic romance, and rebellious flight, are assured by the Ferrari F8 Spider, one of several convertibles, for a range of budgets, that I tested in recent weeks. The F8 — canary yellow, or “Giallo Modena” in company parlance — proved a 211-m.p.h., 710-horsepower fantasy of La Dolce Vita, even when driven along the beaches of Long Island and not the Italian Riviera.

Ferrari’s latest midengine Spider is a heart-skipping beauty, including its 2.7-second scorch to 60 miles per hour. At calmer moments, I retracted or raised its power top even while burbling through traffic, at speeds up to 28 m.p.h.

The F8 may also be the summer’s juiciest forbidden fruit, at least by Hamptons standards: A note was left on its windshield, apparently from a Ferrari 488 owner, pleading to buy this redesigned successor, which won’t appear in showrooms until October. The F8’s $397,000 out-the-door price specified about $40,000 worth of optional carbon-fiber trim — enough to buy some entire convertibles.

Back on earth is the latest MX-5 Miata from Mazda. Its ability to affix a permanent grin is an automotive truism, including on racetracks, where even well-worn models are wildly popular with budget-minded racers. For an appealing $27,500 to start, and $34,500 for the Italianate-styled Club RF version I drove, the Miata reminds enthusiasts that light weight and engaging handling remain paramount virtues.

In light of the lowly sales, the number of convertible model choices is surprising. American perennials include the ragtop Ford Mustang, a go-to for renters in Florida or Hawaii. General Motors has an open-air Chevrolet Camaro and, after a factory coronavirus delay, is rolling out its midengine Corvette convertible to a backlog of waiting customers. Mercedes-Benz offers the most, with six body styles and a raft of engine and model choices.

One, the 603-horsepower Mercedes-AMG S 63 Cabriolet, belongs on any list of the world’s great current automobiles. This four-seat temple of Apollonian design and Dionysian luxury seems fairly priced at $227,000 — relatively. The Rolls-Royce Dawn I drove is an artful, largely hand-built British chariot, but for double the Mercedes’s freight at $460,000.

The Rolls wafts so far above the real world that occupants needn’t sully sanitized hands by touching its reverse-hinged “coach doors,” or “suicide doors” in old muscle-car parlance: A push button automatically closes and latches its bank-vault portals. Should rain threaten the polo fields, a pair of Rolls-Royce umbrellas are discreetly housed in door sills.

It was all blue skies in Mercedes’s S 63 Cabrio. Docked at the curb like a superyacht, sun gleaming on a deck lined with inlaid, lacquered wood, saddle-colored leather and stainless-steel Burmester speaker grilles, the Mercedes took things over the top with its bravura green paint job. A $7,500 extra, the traffic-stopping paint updates a historic Mercedes green from the 1950s and ’60s.

The forest-y shade was popular on full-size Mercedes droptops of that era, said Gorden Wagener, Mercedes-Benz’s chief designer. Those stately convertibles went on a multidecade hiatus before being revived in this range-topping S-Class, including adult-size back seats that are rare in today’s offerings.

Mr. Wagener has been styling Mercedes convertibles for 23 years, including the fearsome, $191,000 AMG GT R Roadster — his most recent ride at his Los Angeles residence, where the roads and climate are ideal backdrops.

“I love a convertible drive on a beautiful summer night, seeing the stars,” he said. “I also love hearing the sound of the V-8. I like to listen to music, but the best music is still the engine.”

Mr. Wagener characterizes convertibles as “more of a show-off car, where you present more of yourself, and you’re more in touch with the environment, less isolated.” But a convertible is far more challenging to design than a coupe, he said, because slicing off the roof can create visual imbalances.

“In design, proportion is everything,” Mr. Wagener said. “But for a convertible, you have to work without a greenhouse, and instead it has like a big tent on top.”

In 1998, Mercedes’s SLK roadster caused a sensation with its then-novel folding hardtop. A trend was born. The idea was that hard-shell roofs would make convertibles quieter, more versatile and more durable against winter elements.

But for these sunniest of conveyances, Mr. Wagener and other designers have seen new light: Retractable hardtops — with notable exceptions like the Ferrari or McLarens — are out. Traditional fabric tops are back in, precisely fitted with multiple insulated layers to keep noise and weather at bay. Most convertible owners store their babies in garages anyway, and avoid driving in rain or snow, Mr. Wagener said.

Retractable hardtops can impress onlookers with origami-like routines as their panels and rear window pivot and stack below a motorized deck lid. But the technology brought its own issues, including oddly shaped rear ends, Rube Goldberg complexity and unsightly seams that break up the lines of the coupe roofs they aim to mimic.

“All that folded sheet metal isn’t in harmony,” Mr. Wagener said. “Fabric is much more luxurious, and gives a couture-fashion aspect.”

A coming Mercedes SL will trade its current metal lid for a cloth roof. BMW’s latest Z4 roadster has also switched back to a fabric roof, and is all the better for it. For the fabric-roofed Corvette, ingenious packaging lets it swallow two sets of golf clubs even with the top folded.

Like Porsche’s stalwart Boxster, the BMW Z4 is the kind of luxury roadster that Miata fans gravitate to as careers and incomes advance. Zipped around the Catskills, the $65,000 Z4 M40i is a summer concoction as bracing and balanced as a perfectly mixed gin and tonic.

Seeking something stronger, I drove BMW’s al fresco flagship, the M8 Competition Convertible: a $156,000, 617-horsepower grand tourer with enough burst and handling to satisfy even a sports-car purist. That includes a 0-to-60 sprint in three seconds flat, barely trailing Ferrari’s F8 supercar.

As for those visual imbalances, some auto fans find cruel sport in calling out cars that should never have spawned a convertible version. On “The Office,” Steve Carrell’s Michael Scott drove a pair of ragged ragtops, Chrysler’s Sebring and PT Cruiser, that underscored his chest-puffing obliviousness as well as any scripted laugh.

Today’s obvious temptation for automakers is the convertible S.U.V., which Ms. Brinley said sounded great on paper, with an outdoorsy rush and family practicality in one, but has failed to gain traction. (The ever-popular Jeep Wrangler has always offered removable roof panels, along with its doors and windshield, but it’s not a convertible per se.)

The first brave-yet-bizarre attempt, Nissan’s Murano CrossCabriolet, was sold from 2011 to 2014. The CrossCabrio resembled a lopped-off Humpty Dumpty, bobbing awkwardly above the road. Critics and shoppers smashed it with rare glee. Yet the Nissan is enjoying some nostalgic reassessment, an oddball that draws curious onlookers wherever it goes.

The dashing Range Rover Evoque convertible fared better in design, but not sales, and Land Rover halted production in 2019 after a three-year run.

It remains to be seen whether the coronavirus pandemic might spark a “eureka” moment, a selling point for naturally air-circulating cars that defy strictures against close-quarter gatherings in indoor spaces. If the romance of the open road hasn’t led Americans to rediscover convertibles, perhaps the dangers of a closed roof will.

Storage Units Are Standing By

BP Prepares for a Future That Needs Less...

Homes for Sale in Brooklyn, Manhattan and Queens

House Hunting on Anguilla: An Oceanfront Retreat for...

Advice for new grads from professionals who graduated...

Here is how to interpret today’s G.D.P. numbers.

How to protect your financial future if you’ve...

Why Kevin O’Leary wouldn’t have given Musk a...