China’s Military Provokes Its Neighbors, but the Message Is for the United States 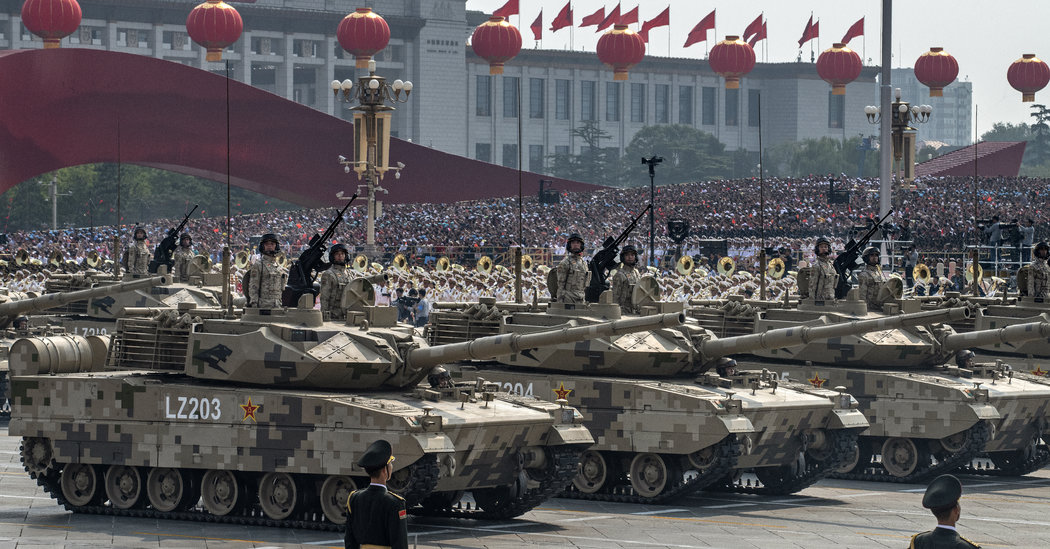 In the same week that Chinese and Indian soldiers engaged in a deadly brawl, one of China’s submarines cruised through the waters near Japan, prompting a scramble of aircraft and ships to track its furtive movements. Chinese fighter jets and at least one bomber buzzed Taiwan’s territorial airspace almost daily.

With the world distracted by the coronavirus pandemic, China’s military has encroached upon its neighbors’ territories on several fronts throughout the spring and now into summer, flexing its military might in ways that have raised alarms across Asia and in Washington.

China’s military assertiveness reflects a growing sense of confidence and capability, but also one of confrontation, particularly with the United States over the pandemic, the fate of Hong Kong and other issues that China considers central to its sovereignty and national pride.

China claims all of its recent operations are defensive, but each increases the risk of a military clash, whether intended or not. That appears to be what happened on the night of June 15, when Chinese and Indian soldiers fought along their disputed border in the Himalayas.

It was the bloodiest clash on that frontier since 1967. According to Chinese analysts, Indian news reports and American intelligence reports, it also caused an undisclosed number of Chinese deaths, the country’s first in combat since its war with Vietnam in 1979.

“I think the possibility of an accidental shot being fired is rising,” Wu Shicun, president of the National Institute for South China Sea Studies, said at a conference in Beijing this week, unveiling a report on American military activity in the region.

China has long acted forcefully to defend the country’s territory and interests, but it is now operating with greater military firepower than ever before.

“Its power is growing at a much greater rate than the other regional powers,” said Adam Ni, director at the China Policy Center, a research organization in Canberra, Australia. “This has really given Beijing more tools at its disposal to push its more assertive and aggressive agenda.”

The increased operational tempo this year follows a military modernization program that began in the 1990s and accelerated under China’s ambitious and authoritarian leader, Xi Jinping. He steadily purged the military’s top ranks of corrupt or insufficiently loyal officers and shifted the focus of the People’s Liberation Army from heavy ground battles to more agile joint operations using air, naval and, increasingly, cyberweapons.

Mr. Xi has also made the military an even greater priority in the wake of the pandemic. China’s premier, Li Keqiang, announced last month that the military budget would rise 6.6 percent this year, to nearly $180 billion, about a quarter of the American defense budget, even as overall government spending was set to decline because of the global economic slowdown.

At the National People’s Congress, Mr. Xi noted the role the military played in Wuhan, where the outbreak began in China, and warned that the pandemic posed challenges to national security. The country, he said, should “step up preparations for military struggles, flexibly carry out actual military training, and comprehensively improve our military’s ability to carry out military missions.”

China’s military is widely thought to remain far behind American armed forces, but it has caught up in some areas, including the expansion of its naval power and the deployment of anti-ship and antiaircraft missiles.

By the end of last year, China was believed to have at least 335 warships, more than the United States, which has 285, according to a report last month by the Congressional Research Service in Washington.

The report said China now posed “a major challenge to the U.S. Navy’s ability to achieve and maintain wartime control of blue-water ocean areas in the Western Pacific — the first such challenge the U.S. Navy has faced since the end of the Cold War.”

China has stepped up its military activity near Taiwan after the self-governing island’s president, Tsai Ing-wen, won re-election in January by beating a candidate viewed as less hostile to Beijing.

One of China’s two aircraft carriers cruised along the eastern coast of Taiwan in April, accompanied by five other warships. Chinese aircraft have repeatedly buzzed Taiwanese airspace in the last week, in what analysts said were tests of the island’s defenses. China plans to hold a military exercise in August that will reportedly simulate the seizure of Taiwan’s Pratas Islands, a cluster of atolls known in Mandarin as the Dongsha Islands.

China has also expanded its claims to the South China Sea, creating two new administrative districts to govern the islands it controls in the Paracel and Spratly chains and menacing other neighbors.

In April, China’s Coast Guard rammed and sank a Vietnamese fishing boat. The same month, a Chinese government research ship stalked an oil vessel in waters Malaysia claims as its own, prompting the United States and Australia to send four warships to monitor the situation. The Philippines lodged a formal diplomatic complaint after a Chinese warship pointed its targeting radar at a Philippine naval vessel.

In the East China Sea, the patrol by a Chinese submarine last week was the first detected since 2018, when Japanese warships forced a nuclear attack submarine to surface. It follows rising tensions over Japan’s administration of the Senkaku Islands, which the Chinese call the Diaoyu Islands.

“When China views it is being challenged in these other sovereignty disputes in this era, it will respond with a very tough line,” M. Taylor Fravel, director of the Security Studies at the Massachusetts Institute of Technology and an expert on China’s military, said.

“China never had the ability to assert itself in the maritime domain until really in the last 10 or 15 years,” Mr. Fravel said, noting the steady buildup of China’s naval and air forces. He added, “That has enabled China to press its claims in the East and South China Sea more than before.”

It has also stepped up patrols in the skies over the region. Gen. Charles Q. Brown Jr., commander of the Pacific Air Forces who will soon take over as the Air Force chief of staff, said Wednesday that until recently China had only occasionally flown missions of its H-6 bombers but was doing so now on an almost daily basis.

Those bombers, while old, have been revamped and equipped with new missiles that China put on display at the military parade last October commemorating the 70th anniversary of the founding of the People’s Republic of China.

For all of its recent activity, China’s military remains untested. The clash with the Indians was an isolated fight with rocks and clubs, not firearms, so it was hardly a test of Chinese military preparedness. It did raise questions about training and discipline.

Details of the incident remain sketchy and impossible to verify independently, but according to some accounts in the Indian news media, a tense, but manageable situation spiraled out of control because inexperienced replacements from other parts of Tibet did not observe the usual protocols for defusing confrontations.

China has not disclosed the number of casualties on its side, though a report by India Today, a major news outlet, said Indian forces turned over the bodies of 16 Chinese soldiers. An American intelligence official in Washington suggested that China was deliberately hiding its losses, which were comparable to India, ranging from 20 to 30.

Song Zhongping, an independent military analyst, said the figure was lower than the Indian claims but would not be released “to avoid stimulating intense sentiment in India.”

While the tensions with India are important, they are not the core Chinese military priority: confronting what it considers American aggression in China’s neighborhood.

The United States, too, has stepped up its military activity in the region. It has sent American warships through the South China Sea and stepped up support for Taiwan and its military — issues that came up this month when Secretary of State Mike Pompeo met China’s top diplomat, Yang Jiechi, in Hawaii.

The Chinese blame the United States for the tensions in the region, accusing the American military of routinely interfering in a region where it has no territorial claims.

Zhu Feng, executive director of the China Center for Collaborative Studies of the South China Sea, who also contributed to the report on American military activity there, warned that the possibility of confrontation would increase as the U.S. presidential campaign heated up.

“The United States has pinned China down with the two talons of the South China Sea and Taiwan issues,” he said.

Reporting and research was contributed by Julian Barnes in Washington, Claire Fu in Beijing and Motoko Rich in Tokyo.

Trump’s Suggestion That Disinfectants Could Be Used to...

One person wounded in second shooting in Seattle’s...

Trump’s Temporary Halt to Immigration Is Part of...