Top Posts
Retail sales July 2020:
Helping Girls Step Up to Entrepreneurship
Honeycomb recipe: How to make honeycomb
U.S. Retail Data Expected to Show an Increase:...
‘It’s like a war’: beatings and indiscriminate arrests...
Somalia’s Army Told Her to Sew a Skirt....
Kingston: A City Remade by the Coronavirus
45 Tweets About Grocery Shopping In The Age...
A Third of TikTok’s U.S. Users May Be...
Welcome to the Covid-19 Mental Health Struggle
Home SportsOther Sports Cardinals-Brewers Game Postponed After St. Louis Records Coronavirus Positives
Other SportsSports 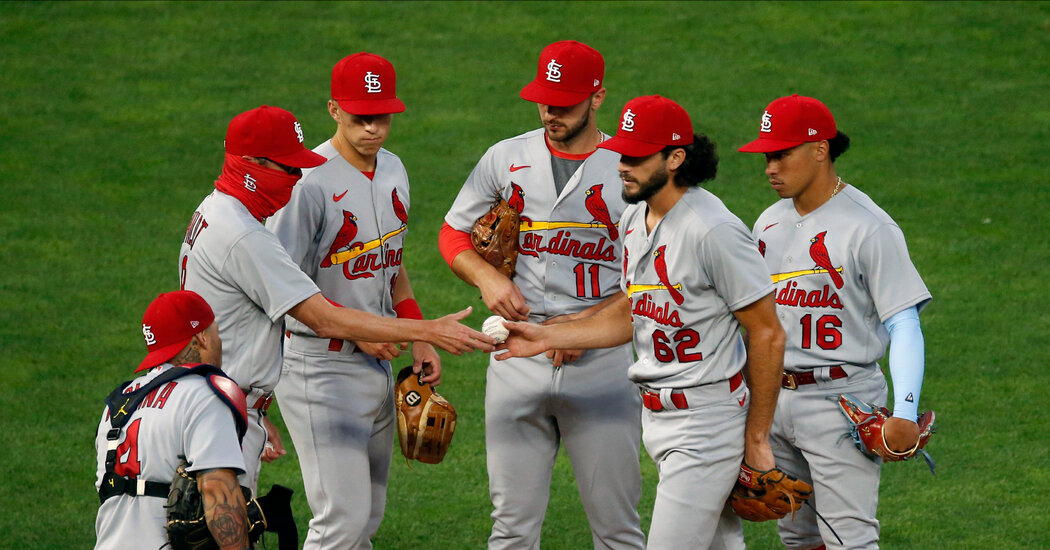 Major League Baseball’s worrying coronavirus outbreak spread into another clubhouse on Friday when the St. Louis Cardinals’ game in Milwaukee was postponed after two Cardinals players tested positive for the virus.

Major League Baseball and the Milwaukee Brewers confirmed the postponement, which baseball said was “consistent with protocols to allow enough time for additional testing and contact tracing to be conducted.”

The game, which was to have been Milwaukee’s long-delayed home opener, was rescheduled as part of a doubleheader on Sunday. The teams’ Saturday night game, however, will be played as scheduled, M.L.B. said, though it said it would provide updates “as appropriate.”

The Cardinals-Brewers game is the third postponement on baseball’s Friday night schedule, following earlier ones involving the Miami Marlins, who were to play the Washington Nationals, and the Philadelphia Phillies, who were to host Toronto. The Marlins have had 18 players (including another on Friday) and two staff members test positive this week; those cases have already upended baseball’s revised schedule.

For now, Major League Baseball hopes that the Cardinals and the Brewers can stage a doubleheader on Sunday to make up Friday’s game, using the new rule for 2020 in which doubleheader games will last only seven innings.

But the three games postponed on Friday mean that six teams — 20 percent of M.L.B.’s 30 squads — have been idled by the virus. Two other teams, the Yankees and the Baltimore Orioles, also have had games called off because of the cascading schedule changes as baseball strains to isolate the affected teams.

In an interview with MLB Network on Monday, baseball’s commissioner, Rob Manfred, expressed confidence that baseball would be able to manage the outbreaks and continue its season.

“We knew that we were going to have positives at some point in time,” Manfred said. “I remain optimistic that the protocols are strong enough that it will allow us to continue to play, even through an outbreak like this, and complete our season.”

The Phillies on Thursday became the second team, after the Marlins, to miss a full week of play when the league postponed scheduled games for this weekend after a Phillies coach and a clubhouse attendant received positive test results for the coronavirus.

The Phillies had hoped to play a doubleheader with the Blue Jays on Saturday in Philadelphia and another game on Sunday, but the positive tests caused the team to shut down their stadium, Citizens Bank Park, for baseball activity.

The Marlins, who played three games in Philadelphia last weekend, have had 20 positive tests for the coronavirus within their traveling party, including 18 players. The team has remained in isolation in Philadelphia while receiving testing and treatment. No Phillies players are known to have tested positive.

The Yankees’ 2 Goals: Avoid the Coronavirus, and...

There’s a Pandemic. Is This a Time for...

Spencer Dinwiddie and DeAndre Jordan of the Nets...

At Belmont’s Backstretch, Caring for Horses During the...

Soccer’s Landscape Was Already Shifting. Then an Earthquake...