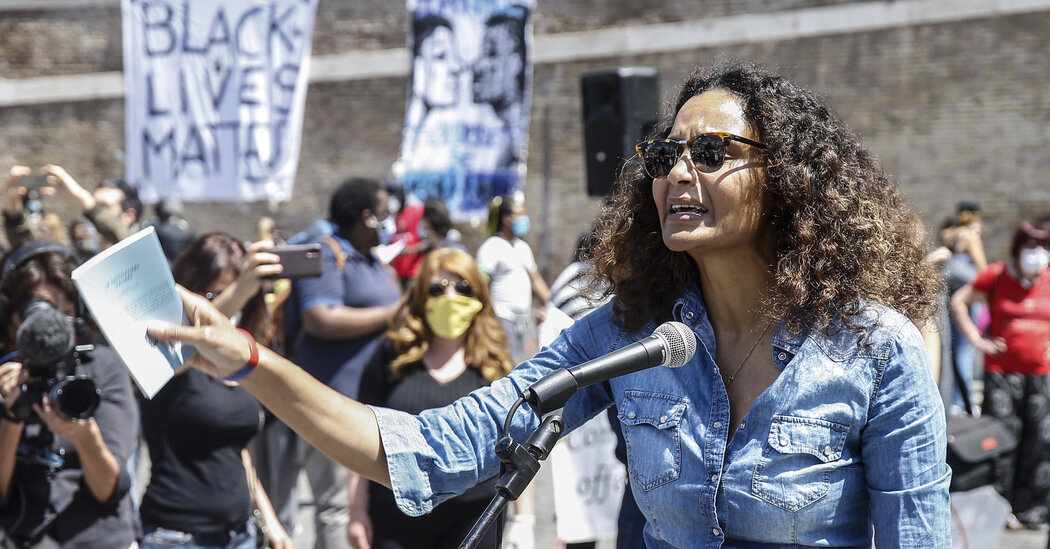 The designer Stella Jean wanted to make something clear about an impassioned letter she sent to Italian fashion’s governing body: “It’s not a protest,” she said. “I’m not protesting. It’s a proposal.”

Last week Ms. Jean sent the letter — titled “Do #BLM in Italian Fashion?” — to the president and 14 executive board members of the Camera Nazionale della Moda Italiana, which organizes the Milan shows. Those board members included the chief executives of Gucci, Dolce & Gabbana, Prada and more. The letter was co-signed by Edward Buchanan, an American designer based in Milan.

In the letter, shared with reporters on July 30, Ms. Jean and Mr. Buchanan asked for “a constructive, working dialogue” about how to best support the country’s Black designers ahead of Milan Fashion Week in September.

They acknowledged that in late 2019, the fashion council had published a manifesto promising “sweeping reforms” in diversity and inclusion. They suggested that those reforms had not yet come.

As evidence, Ms. Jean cited the recent Milan Digital Fashion Week, which had no Black designers on the main streaming calendar, she said — though a few were highlighted elsewhere on the website, alongside other international or emerging brands.

“Let’s change things,” she and Mr. Buchanan wrote in the letter. Instead of round tables on diversity, they proposed “true work, true collaboration.”

Carlo Capasa, the president of the Camera Nazionale della Moda Italiana, said in an email Friday that the council’s commitment to inclusion was “real and measurable,” pointing to its manifesto, its “huge” effort to scout emerging brands and, in particular, its years of financial assistance to Ms. Jean.

“I can say we supported her brand in an extraordinary way in comparison to our standard support to emerging brands,” he said.

The Italian fashion industry has been long criticized over incidences of racism and cultural appropriation. In recent years, Dolce & Gabbana released ads that drove Chinese customers to burn their past purchases; Prada made bag charms that evoked blackface; Gucci made balaclava sweaters that were similarly suggestive.

But the controversies in Italian fashion have kept coming: Marni apologized Wednesday for a “Jungle Mood” campaign that the fashion industry watchdog Diet Prada called out for “alluding to racist, colonial stereotypes.”

Ms. Jean, who is Haitian-Italian, had a suggestion for these brands in her letter: “For companies wishing to continue to draw free inspiration from Black culture,” an organization called Made in Africa will provide a list of African artisans who can “train and collaborate with Italian companies,” so that brands “no longer create collections simply inspired by Africa,” but are “consciously created with Africa.”

The letter also suggested creating a public database of Italian fashion companies and their percentages of Black employees. (Mr. Capasa said the council was conducting a survey to “map and monitor” brands’ inclusion and diversity efforts.) It emphasized the need to spotlight Black talent and for young Black designers to have access to fashion schools in Italy.

In responding to the letter, Mr. Capasa told Ms. Jean that he agreed it was “time to pass from words to action,” according to a copy of the response that he provided to The New York Times. He gave examples of recent events and public discussions hosted by his organization featuring Black voices from around the world.

He wrote that it was “a pity” Ms. Jean had never asked to be part of the diversity and inclusion work group, and he maintained that she had always been given support, attaching a list of discounts she had received since 2013, totaling more than 175,000 euros.

“We’ve granted you various gratuities and preferential treatment in the last few years,” he said. “I don’t understand why you write as if none of this ever happened.”

In an interview, Ms. Jean acknowledged the financial help but said that Mr. Capasa had missed the point of her letter: It wasn’t about her but about all Black people in Italian fashion.

“We are still completely invisible to them,” she said.

More than 100 companies make up the Camera Nazionale della Moda Italiana, but Ms. Jean said her company is the only Black-owned brand.

This is not her first time speaking out about the marginalization of people of color in Italy. During Milan Fashion Week in February, instead of a runway show, she made a video featuring Italian women — students, lawyers, executives — sharing racist remarks they had received. (It was more upbeat than it sounds.)

Ms. Jean said she will not return to the official Milan Fashion Week calendar until she is no longer the only Black designer on it. She has grown tired of being an anomaly.

“I don’t want to be the only one anymore,” she said. “But it’s not about boycotting. It’s about asking for change.”

WNYC’s Alison Stewart on Being a Homebody

Renting Or Buying An RV This Summer? These...

Study explains what you should know to be...

The 10 Most Popular Shows On Netflix Right...

Weight loss tips: How can you lose weight...

The Many Masks of Nancy Pelosi