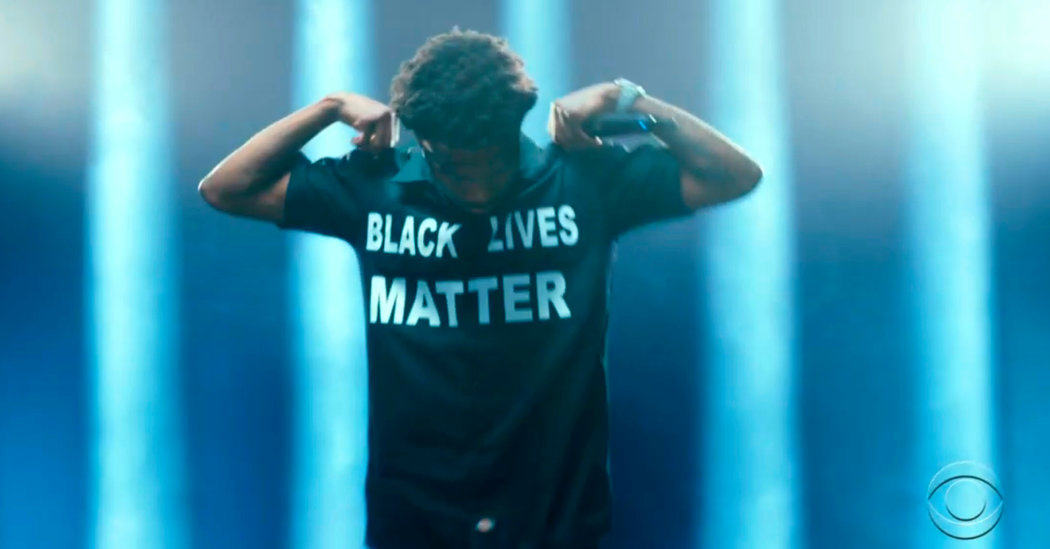 Political performances by Public Enemy, DaBaby, Alicia Keys and John Legend, civic-minded speeches by Michelle Obama and Beyoncé, and a series of tributes to George Floyd and Breonna Taylor led a virtual, mostly socially distanced and social justice-themed version of the BET Awards on Sunday, the first major awards show of the pandemic era.

The host, Amanda Seales, a comedian, actress and activist, cited “Covid and cops and Karens gone wild” as the reason for an atypical event, but insisted in her opening monologue: “We had to do the awards. We deserve a break. And when I say we, I mean all us black folks.”

Nearly every act, appearance, acceptance speech and even advertisement that followed made some reference to the wave of protests against police brutality that spread worldwide after Floyd was killed in Minneapolis on Memorial Day, bringing renewed attention to many other cases of black people who have suffered at the hands of law enforcement or racist violence.

The awards show, which was made up of taped performances and speeches because of the virus, aired for the first time on CBS, in addition to BET, following the merger last year of the broadcast giant and Viacom, BET’s parent company. And rather than the lo-fi, at-home performances from couches and kitchens that have become standard television fare during the Covid-19 crisis, BET provided budgets for its far-flung talent to produce remote segments that were often more like mini-music videos than the typically raw and sometimes glitchy live awards-show stagings.

Megan Thee Stallion, who won the award for best female hip-hop artist, performed her hit “Savage” — sans Beyoncé, who appears on the remix — in a “Mad Max”-style desert landscape, complete with a black power fist background, while Legend was joined by a choir in an abandoned warehouse for a rendition of his latest tear-jerker, “We Will Never Break.”

The show — celebrating its 20th year, along with 40 years of BET as a network — began and ended with gospel music, first featuring Keedron Bryant, a 12-year-old internet sensation whose song “I Just Wanna Live” starts, “I’m a young black man/Doing all that I can.” In a closing number, the mother and daughter combination of Kierra Sheard and Karen Clark Sheard (originally of the Clark Sisters) sang “Something Has to Break.”

Earlier, in fiery segments, Public Enemy was joined by Nas, Rapsody, Black Thought, Questlove, YG and others for an updated version of the hip-hop classic “Fight the Power”; Lil Wayne led a rapped tribute to Kobe Bryant; and the North Carolina rapper DaBaby opened his remix of the Billboard No. 1 single “Rockstar” pressed up against asphalt, a police officer’s knee pressed into his neck in an unmistakable reference to the video of Floyd’s death. Later in the song, DaBaby appeared atop a police car, smashing the windshield while surrounded by protesters in T-shirts reading “I Am George Floyd” and “I Am Breonna Taylor.”

An epilogue following his performance read, “In loving memory of all the lives lost to racism and police brutality.”

Anderson .Paak and Keys also centered their segments around black lives lost, with Keys singing “Perfect Way to Die” on an empty street corner surrounded by the names of victims written in chalk. Roddy Ricch performed “High Fashion” and “The Box” in a Black Lives Matter shirt.

Additional tributes included Wayne Brady performing in honor of Little Richard, who died in May, and Jennifer Hudson doing her take on Aretha Franklin’s gospel version of “Young, Gifted and Black,” originally by Nina Simone.

The former first lady Michelle Obama presented BET’s humanitarian award to Beyoncé (“To my girl, I just want to say: You inspire me, you inspire all of us,” she said), while the singer — whose new “Lion King”-inspired music film, “Black Is King,” will premiere on Disney Plus on July 31 — used her acceptance speech to thank protesters and encourage them to vote.

“We have to vote like our life depends on it,” Beyoncé said, “because it does.”

Stacey Dash Says She Is Ending Her Fourth...

Death in Paradise season 10: Where is the...

The Woods: Is Netflix’s The Woods based on...