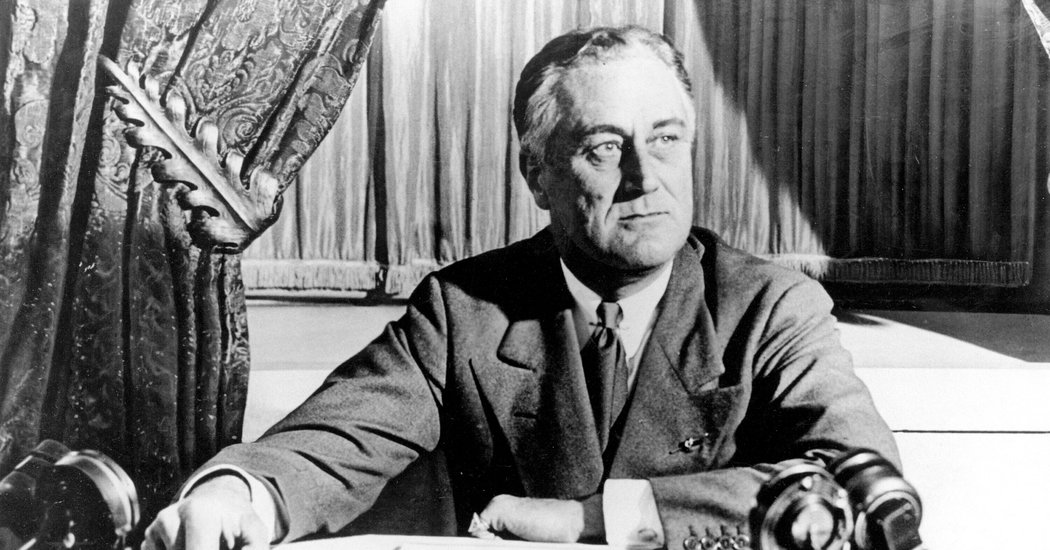 LONDON — Boris Johnson and Joseph R. Biden Jr. are hardly political bedfellows. But the British prime minister and the American presidential candidate have one thing in common: both have latched on to Franklin D. Roosevelt as a model for how to lead in an era of economic collapse and social upheaval.

Mr. Johnson, regrouping after a rocky three months of dealing with the coronavirus pandemic, has invoked Roosevelt’s name and the legacy of the New Deal in promising that the British government will intensify its plans for ambitious public works projects and other spending to recover from the outbreak.

“This is the moment for a Rooseveltian approach to the U.K,” Mr. Johnson said in an interview with Times Radio on Monday. “The country has gone through a profound shock. But in those moments, you have the opportunity to change, and to do things better.”

Mr. Biden, the presumptive Democratic nominee, has talked about the need for an F.D.R.-style federal intervention to lift the United States out of the economic wreckage left by the virus and to address the racial injustice dramatized by the killing of black Americans at the hands of the police.

Neither man is an obvious heir to the mantle of Roosevelt, though Mr. Biden at least comes from the same party. Mr. Johnson is a Conservative populist who ran on a platform of pulling Britain out of the European Union and had, until now, modeled himself on Roosevelt’s wartime ally, Winston Churchill.

Still, there are signs that Mr. Johnson’s flirtation with Roosevelt goes beyond dropping his name. One of his closest advisers, Michael Gove, recently laid out a blueprint for the government that draws heavily on the 32nd president to justify a transformation of the bureaucracy and a new approach to governing.

“Roosevelt recognized that, faced with a crisis that had shaken faith in government, it was not simply a change of personnel and rhetoric that was required, but a change in structure, ambition, and organization,” Mr. Gove said in a lecture to the Ditchley Foundation, a nonprofit group that promotes Anglo-American relations.

Mr. Gove recalled the reform-minded outsiders that Roosevelt brought in to design the New Deal — Harry Hopkins, Harold Ickes and others — and lamented the lack of such figures in the British government.

Mr. Johnson and his aides have argued that Britain’s Civil Service is hidebound, risk-averse and hostile to their pro-Brexit ideology. On Sunday, Mr. Johnson announced the departure of the country’s top civil servant, Mark Sedwill, who was cabinet secretary and national security adviser.

His resignation follows that of the top officials at the Home Office and the Foreign Office as well as the British ambassador to Washington, Kim Darroch. It is a victory for Dominic Cummings, Mr. Johnson’s most influential adviser, who views many civil servants as part of what he calls an establishment “blob” that also encompasses the BBC, parts of the judiciary and universities. In a line that has been widely repeated, he has told aides that a “hard rain is coming” for the bureaucracy.

The government wants “to have a more politically directed Civil Service, which is not necessarily a politicized Civil Service, but one that they feel is responsive to political direction,” said Simon Fraser, a former head of the Foreign Office. “Where you have to be wary is if that tips over into an attack on the impartiality of the Civil Service.”

On Tuesday, Mr. Johnson is expected to visit a town in an economically blighted region to outline plans to invest in infrastructure, education and technology, testing his New Deal strategy. He has promised to “level up” places left behind by the British economy, where prosperity has flowed disproportionately to London and the southeast of England.

Fulfilling that promise is critical to Mr. Johnson’s long-term fortunes, since his political base is very different from that of previous Conservative Party prime ministers. Mr. Johnson won with the support of working-class voters in the Midlands and the north, many of whom historically voted for the Labour Party but favored Brexit and are socially conservative on issues like immigration.

“Boris Johnson won the election by developing a new formula of leaning left on the economy and right on culture, promising to deliver Brexit and reform immigration,” said Matthew Goodwin, an expert on the right and a visiting senior fellow at Chatham House, a research institute in London.

“He is talking about giving them trains, bridges and schools,” Mr. Goodwin said. “But I suspect that what this community wants is more power in decision making, and more of a say in the national conversation.”

Reassuring these voters on social and cultural issues could be just as important as promising them economic benefits, which is why Mr. Johnson’s administration has maintained such a deep-rooted strand of social conservatism. It likes to present itself as the enemy of the London-based political elite that it says is out of touch with vast swaths of the country. Mr. Johnson’s vitriolic defense against the protesters who defaced a statue of Churchill is also part of this strategy.

As the debates over racial injustice continue to reverberate in Britain — and as Mr. Johnson struggles to hold together his electoral coalition — some analysts predict that he might begin to sound more like President Trump than President Roosevelt.

Unlike Mr. Biden, for whom a victory in November would empower a broader liberal agenda in the United States, Mr. Johnson governs as a Conservative, though he is still considered more moderate than Mr. Trump.

Analysts note that Mr. Johnson is trying to transform the party of Margaret Thatcher, with its credo of low taxes, lighter regulation, and less government, into something close to a European-style Social Democratic party, at least on economic matters. How he squares that circle is far from clear.

“A Rooseveltian New Deal strategy would go down fairly well with a large proportion of the electorate, and even with the Conservative electorate,” said Tim Bale, a professor of politics at Queen Mary University. “The problem he has is that this is not what most of his M.P.s joined the Conservative Party to do.”

It is also not clear that Mr. Johnson will have the fortitude to see through a program as revolutionary as the New Deal. Critics note that he is not a politician driven by conviction. His policy agenda is largely the brainchild of Mr. Cummings. While Mr. Johnson had the tactical skills to fashion a winning coalition, some doubt that he has the vision to guide his country through momentous change.

“F.D.R. was someone who had an extraordinary intuitive feel for where the public was and what the mood of the country was,” said Robert Dallek, an American presidential historian who published a biography of Roosevelt in 2017. “Does someone like Boris Johnson have that?”

French Take Their Apéros to the Streets, Testing...

Spies and Commandos Warned Months Ago of Russian...